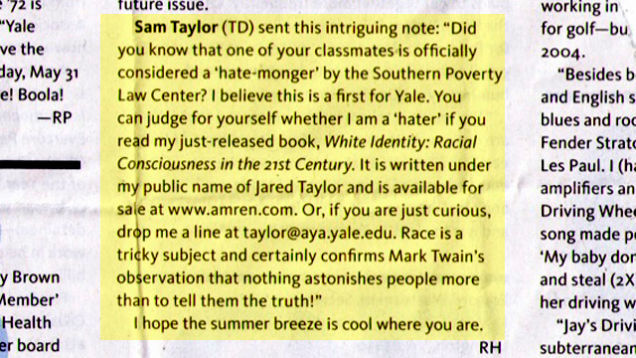 This was apparently first noticed by Politico Columnist Ben Smith, who called Taylor a “white supremacist,” in a tweet, but noted it more of a curiosity than an outrage.

What was so scandalous?

Taylor wrote to his alma matter,?

“Did you know that one of your classmates is officially considered a “hate-monger” by the Southern Poverty Law Center? I believe this is a first for Yale. You can judge for yourself whether I am a “hater” if you read my just-released book, White Identity: Racial Consciousness in the 21st Century.”

He gives information as to where they can buy the book and contact them and concludes “Race is a tricky subject and certainly confirms Mark Twain’s observation that noting astonishes people more than to tell them the truth.”

Gawker was of course outraged, noting “An inquiry to Yale Alumni Magazine as to why it’s letting a racist flog his racist book in its pages hasn’t been returned.”
Actually, the class secretary answered that question in her preface to Taylor’s update, “Taylor sent this intriguing note”[emphasis added]

Most people, regardless of whether they agree with Taylor, find being labeled a “hate-monger” more interesting than the usual mundane alumni notes. The two other Class of ‘73 notes were a few alumni celebrating their 60th Birthdays with a trip to France and someone being appointed to California Occupational Safety and Health Appeals Board.  How intriguing.

The fact that the editor of one of the most popular political websites tweeted about this, and then a gossip site blogged about it should be prima facie proof that Jared’s note is “intriguing.” Gawker calls the Yale Notes section, “one of those little message-board-style missives that lets all your classmates know what you’ve been up to.”  In other words, it’s an open forum for alumni. So they are not “promoting” Taylor, they just are not censoring him. This is of course what makes Gawker so outraged.

I would hope that if Jared’s views are as evil and terrible as Gawker thinks they are, Yale alumni would be intelligent enough to realize his arguments are wrong.

It’s also worth noting that Gawker gets very very upset about smart people at Ivy League schools having heterodox opinions on race.  They published half a dozen stories about Harvard Law student Stephanie Grace having the temerity of speculating that there might be genetic reasons for racial differences in intelligence in a private e-mail.

I don’t know whether or not Yale Alumni Notes will cave and issue an apology for publishing Taylor’s note, but Ben Smith and Gawker did much more to promote his views than the magazine. Gawker is the 267th most trafficked website in the entire country and Smith has over 46,000 followers on twitter.  I’m sure a few of them will see through the liberal smugness and look pick up White Identity.