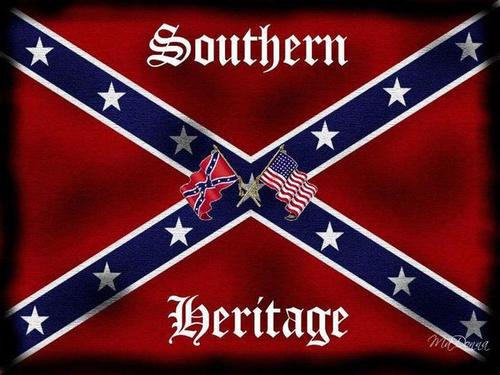 Heeb magazine is targeted at a certain strata of the New York Jewish community and much of its content is pretty startling. I doubt if anything startled its readers more recently then Flagbashing by Jewdar June 29, 2015.

This is up to a point a defense of the right to fly the Confederate Battle Flag and a quite tolerant recognition that the South is and has a right to be a distinct community. This is a very unusual attitude for Heeb’s neck of the woods.

The Tel Aviv-born, Milwaukee-bred Jewdar has a bachelors' from the University of Wisconsin, a Masters from NYU, and an Honorable Discharge from the US Army, where he spent two years as an infantryman in the 101st Airborne Division.

Perhaps the special experience of Israel has formed a more tolerant understanding of nationalisms than present in some other American Jews.

Of the South he writes

Jewdar was stationed in the South for two years, and, at least on a personal level, has nothing but nice things to say...Between our personal experience and our reading on the subject–a pet peeve of ours–we understand something about Southerners’ relationship to the flag and to the Confederacy as a whole…

The South is different.  Let Jewdar make this clear–we are not a fan of the smarmy liberal tendency to paint all Southerners as illiterate rednecks…for a long, long time–even before the Civil War–there was a Southern identity distinct from the rest of the country.  Again, even before the Civil War…it was clear to many that in terms of economics and demographics, the North and West, industrializing and receiving waves of immigration–much of it Catholic, were becoming very different places from a rural South still made up overwhelmingly of the descendants of Protestant British immigrants… we do recognize that for some, the flag is not a symbol of racism, or even the Confederacy, but simply “Southernness.”

So he draws conclusion which by 2015 standards is very moderate

If...some people still want to fly the Stars and Bars on their private property, they should absolutely have the right to do so. Whatever personal meaning that flag has for them is their business. We might think they are being ignorant, or dishonest, or just plain racist, but that’s precisely the kind of constitutional right that Jewdar was all-too-ready to kill or die.

while still applauding the flag’s removal from public places.

While Jewdar is not a fan of speech laws, there is a part of us that feels that nobody should be legally allowed to discuss the causes of the Civil War unless they have read it.

Unfortunately he seems to fall into the notorious Howard Zinn School of historiography —facts only exist if they support the argument. And I am surprised he makes the error of calling the Battle Flag the Stars and Bars. Denouncing a flag created for fighting soldiers in combat for the supposed political objectives of the State they served fails to consider the separate nature of military service–strange in a man clearly proud of his own time with the 101st Airborne.

Jewdar is at his weakest in his venomous denunciations of the Confederates as traitors. Less than 80 years before the war broke out, most British and not a few Americans considered the leaders of the American Revolution to be traitors—and technically they were correct. Slinging around this word is silly.

However Jewdar is not without insight

The average Confederate soldier wasn’t fighting because he owned slaves, but because he felt that he derived some benefit from the institution of slavery (or at the very least, because he preferred slavery to the alternative of a large free black population).

(My emphasis). Considering what “large free black populations” have done to cities like Detroit and Birmingham the "average Confederate soldier" has to be admitted to have been prescient.

For a more scholarly consideration of Southern uniqueness, I recommend Occidental Dissent's Blood and Soil: How Southerners Became a Separate and Distinct People

Still, most of the community amongst which Jewdar moves think Southerners are Cossacks who need Soviet-style repression (before moving on to deal with the rest of America).

Jewdar is much better than that.