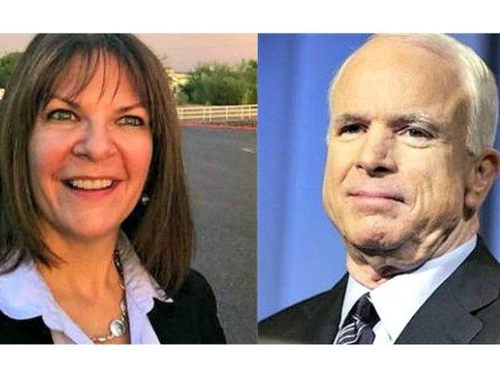 In Arizona, Kelli Ward Plans to Take on John McCain in the Primary

John McCain is a long-time enemy of the historic American nation. The man has been capitalizing on his war record as a POW for decades, but his former service does not give him the right to betray American citizens by promoting the invasion and transformation of the United States.

MCain has a grade of 28% from Numbers USA, only one percentage point higher than that of Arizona's District 3 Representative Raul Grijalva, a MEChA alumnus. (See here, here and here).

On foreign policy, McCain is gung-ho to attack several Middle Eastern countries and may be crazy enough to risk war with Russia.

Apparently, McCain, now 78, is planning to run for re-election next year.

Those who think we should just wait for McCain to keel over may have a long wait. McCain is a tough old geezer and has some longevity genes inherited from his mother Roberta, who is still going strong at 103 years of age. Here is a photo of her from just two years ago, that's Roberta McCain on the right and Greta van Susteren on the left.

Here at VDARE.COM, we can't endorse candidates, but I can point out that somebody in Arizona is planning to run against McCain in the primary. What McCain could do is simply choose not to run again and enjoy his retirement. Why not?

In the meantime, however, Jazz Shaw at Hot Air reports that Arizona State Senator Kelli Ward is planning to take on McCain in the primary:

I remember people talking about running a primary challenge against John McCain since at least his 2008 presidential run. That came to pass in 2010, but J.D. Hayworth wound up being beaten like a rug to the tune of more than a twenty point spread. Next year it’s time for McCain to face the voters again and he’s already drawn a challenger for his party’s nomination. State Senator Kelli Ward (R – Lake Havasu City) has been building a team and getting ready for this fight since early this year and she was recently in D.C. talking up her bid and looking for conservative support. (Daily Caller)

Definitely, unseating McCain would be a very conservative thing to do. Not endorsing anybody, just saying.

Is this a threat McCain is (or should be) taking seriously? One of the first issues to look at is the money. Ward reports having raised a little over a half million dollars this year. McCain is sitting on a bit more than twice that much. Neither is a shockingly high amount for a Senate race these days. (One of the last estimates I saw in New York from some campaign strategists was telling aspiring candidates to not even bother if they couldn’t come up with five million, but that includes the general.) McCain’s been around this game for a long time and has a lot of friends. If he wanted to turn on the afterburners I have no doubt he could knock together five or six times as much as he has now in fairly short order.

Perhaps more disturbing for McCain than the money question is the dip he’s seen in his poll numbers at home. A little more than two months ago a Gravis poll had McCain losing to Ward by nine points. (Five months earlier most of the state had no idea who she was.) Further, his favorability rating had sagged from being in the sixties in 2008 to 41% this summer. That’s not lethal territory for a long time incumbent but it’s got to be a troubling sign.

Perhaps the biggest question which comes to my mind is… why is McCain sticking around? By the time the primary vote takes place next August McCain will be turning 80 years old. Obviously there’s no upper limit for serving, but at this point hasn’t he had enough of performing in this circus? It’s just puzzling to me what he thinks six more years is going to do and he’s obviously put in his time serving the nation. He’s getting beaten up by the conservatives in his own party and it’s not like the Democrats are doing him any favors. And if he’s got a serious challenger who will require him to go back into dialing for dollars mode to fend off a primary bid and his numbers are down, it seem like one would want to go out on top after a career such as his. Why risk it? Retiring would seem like a much preferable option to being booted out by a competitor from your own party.

Hopefully our Arizona readers have some more to add to this discussion. It's something to keep an eye on.