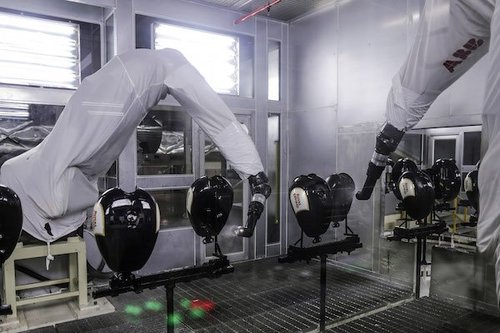 Above, robot arms spray motorcycle gas tanks in a factory in India.

Manufacturing robots are showing up in interesting places, and not just in industrialized economies any more. Despite India’s having an abundance of very cheap labor, it is just as susceptible as America to automation because robots have gotten inexpensive enough to make them competitive with humans.

The Bloomberg article is noteworthy for its straight talk about the workplace revolution, signaled by using the phrase “robot invasion” (!) in the title. The threat to jobs isn’t disguised by pretense that the smart machines are there to “help” human employees do the unpleasant or boring work. One industry spin has been that the machines are “collaborative robots” or “cobots.” Nope, the machines are there to replace humans who are not as precise or cheap to operate.

Plus, an interesting fact tucked in the lower paragraphs is that 287 million Indians are illiterate. Whoa, aren’t we told repeatedly that Indians make model immigrants? Didn’t Sixty Minutes argue some years back that Indians are smarter than Americans and we should meekly accept them as replacements for citizen workers in tech jobs? It’s good to keep the big picture in mind.

Just remember that the rapid transformation of the workplace by automation, robots and computers smashes the fable of open-border enthusiasts that millions of immigrant workers must be admitted to fill jobs left by the retiring boomer generation. One estimate is that nearly half of US jobs may be computerized by 2033, according to a study from Oxford University.

Now back to India, where apparently its distance makes the discussion of the automation’s consequences acceptable.

In a sweltering factory in southern India, Royal Enfield motorcycles are being painted and lacquered by giant robotic arms that move at twice the maximum speed of a human limb, day in, day out, never making a mistake.

Only a few workers are still needed on the paint line at Royal Enfield Motors Ltd.’s plant in Oragadam, doing touch-ups on the iconic two-wheelers coveted for their classic design. Four robots can do the work of 15 human painters toiling across three shifts.

Robots and automation are invigorating once-sleepy Indian factories, boosting productivity by carrying out low-skill tasks more efficiently. While in theory, improved output is good for economic growth, the trend is creating a headache for Prime Minister Narendra Modi: Robots are diminishing roles for unskilled laborers that he wants to put to work as part of his Make in India campaign aimed at creating jobs for the poor.

India’s largely uneducated labor force and broken educational system aren’t ready for the more complex jobs that workers need when their low-skilled roles are taken over by machines. Meanwhile, nations employing robots more quickly, such as China, are becoming even more competitive.

“The need for unskilled labor is beginning to diminish,” Akhilesh Tilotia, head of thematic research at Kotak Institutional Equities in Mumbai and author of a book on India’s demographic impact. “Whatever education we’re putting in and whatever skill development we’re potentially trying to put out — does it match where the industry will potentially be five to 10 years hence? That linkage is reasonably broken in India.”

Improving automation will “likely compete with some low-skill tasks,” Standard Chartered Plc economists in London and Toronto wrote in a May report.

Royal Enfield Motors’ plant, near Chennai, is an example. Spray painting is a repetitive and hazardous job, perfect for a machine. Done manually, it exposes laborers to noxious, dizzying paint fumes that can impair memory and cognitive function.

Humans are imperfect: They miss spots, which can corrode the bike. They waste more because they go over the same place twice. No human can paint exactly the same way each time.

Robots also mean more nimble production in an era of frequent product launches and shorter manufacturing cycles: while a human needs to be retrained, a robot can switch at a touch of a button.

“Large manufacturing plants can really struggle to find enough stable, skilled blue-collar workers that can do repetitive tasks day in, day out,” said Per Vegard Nerseth, ABB’s global head of robotics. “Turnover is very high, so you have a huge task training people, which incurs costs. That makes the payback for robots more favorable for a company.”

The Oragadam plant started with four painting robots in 2013 and plans to add 14 more as it expands. Both Royal Enfield and ABB declined to disclose the cost of the machines but said the investment will pay for itself in about two years.

Royal Enfield’s motorcycles, ridden by British troops in World War II, have cult appeal among enthusiasts, and the waiting list to buy one has been as long as a year. Fans who have owned one include Brad Pitt and Billy Joel.

Its older plant further north has also recently added four welding robots, which do in 20 seconds what takes two minutes for a human. The company declined to say how many workers were displaced or whether it has further automation plans for the facility, at Tiruvottiyur.

While displacing some types of jobs, robots also create new ones, like engineers to maintain and program them. A study by industrial analysis firm Metra Martech Ltd. shows they help create more jobs than they eliminate from the assembly line.

India can use the help. Labor productivity in Indian factories is the worst among major economies, according to a report by the Boston Consulting Group and the Confederation of Indian Industry. Brazilians, who ranked second to last, are still three times more productive than Indian workers.

Robot installations in India grew 23 percent in 2013 from the previous year, with annual sales hitting a record 1,900, the latest figures available from the International Federation of Robotics. That’s just a fraction of China. About 56,000 units were sold last year alone in the world’s biggest robot market, where factories including iPhone producer Foxconn Technology Group arehelping China keep its manufacturing edge against lower-wage rivals.

It’s not just factory jobs either. In Meerut, about 80 kilometers (50 miles) northeast of the capital Delhi, local police are considering using robots to help guide traffic at busy intersections, Ramit Sharma, the city’s deputy inspector general, said by phone on Monday. Information technology companies and banks are also looking to automation to eliminate lower-end jobs and clerical staff, according to a June report by Kotak.

Still, robots have barely penetrated India and China relative to the size of their labor forces. Rather, Thailand, Indonesia and Malaysia lead developing Asian nations in robot density — the number of industrial robots for every 10,000 manufacturing workers, according to IFR data.

“There’s the threat of India losing out,” said Madhur Jha, senior economist at Standard Chartered in London. “Other countries are slightly more developed, have a stronger manufacturing base, and are moving toward automation more quickly to keep themselves competitive.”

When Modi announced his Make in India campaign in September, he cited India’s “greatest strength” as having 65 percent of the population under 35.

That demographic dividend may not pay out as expected.

For one, India’s working-age population is increasing far faster than the number of jobs in the formal sector: roughly 1 million a month versus 1 million a year, according to a report by JustJobs Network, a labor research institute.

It’s also not clear if factories planned today will create the number and type of jobs that Modi is expecting.

“If you build a factory today assuming that it will create 100 jobs, in the course of 10 years as new technologies are adopted, it may create only 10 or 20 percent of the jobs you expected,” said Makoto Yokoyama, the head of Mitsubishi Electric Corp.’s factory automation division in India, who has witnessed Japan’s car plants employ fewer and fewer workers.

“It’d be a lie to say that robots won’t steal jobs,” said Sonali Kulkarni, who heads the India unit of Fanuc Corp., one of the world’s biggest robot makers. “They will, but not the jobs that people should be aspiring to. People are capable of really a lot more than mindlessly loading or unloading from a machine or welding.”

Yet India is failing to educate its illiterate 287 million — greater than the population of every other country except China and the U.S. — to do much more than that.

The average Indian adult has been schooled for only 4.4 years, the worst among Asia’s major developing economies, according to United Nations data. Worse, half of the 5 million graduating annually with bachelor’s degrees are unemployable because of poor cognitive and language skills, according to a study by Aspiring Minds, a skills-assessment company. Larsen & Toubro Ltd., India’s biggest engineering firm, is forced to train new hires from scratch.

“The challenge for many emerging markets, like India, will not be to create low-cost jobs, but to make use of its gigantic human potential through broader and better education,” said Antoine van Agtmael, a former World Bank economist who coined the term emerging markets and is writing a book on automation undermining the advantage of cheap labor.

In the race to create factory jobs, Modi isn’t just competing against Asian rivals. Robots are increasingly helping developed economies. In Switzerland, robots make toothbrushes for export; in Spain, they cut and pack lettuce heads — a job previously done by migrants; in Germany, they fill tubs of ice cream, and in the U.K. they assemble yogurt into multipacks at a rate of 80 a minute.

Tharman Shanmugaratnam, chairman of the International Monetary Fund’s policy advisory committee until March and Singapore’s finance minister, gives India — and rivals such as Thailand, Vietnam and Malaysia — a fast-closing window to catch up with rich countries or miss the boat.

“Time is not on India’s side,” he told Indian policymakers at a government conference in December. “I give 10 years for labor-intensive manufacturing to survive in its present form before machines take over.”