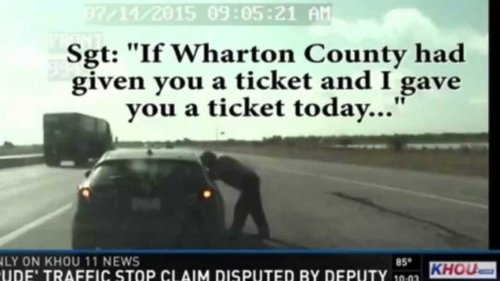 Over at American Thinker, Colin Flaherty, author of White Girl Bleed Alot, explains the good that videos have done for cops accused of harassing black motorists.

A black legislator in Texas, Garnet Coleman, accused a cop of being rude, nasty talking to him "like a child." The cop had pulled Coleman for driving 94 mph.[Camera Saves Cop from Racial Hostility – Again, August 11, 2015]

Coleman lied about the cop, as the tape showed:

This is familiar territory for Coleman, who gets lots of awards for accusing lots of people of racism.

But the cop’s dash camera recorded a different story. One that must interrupt, however briefly, Coleman’s installation in the Black Victims Hall of Fame.

The cop’s camera recorded the state legislator as he burned by him doing 94 miles per hour — in his personal car with state tags.

On the side of the road, the officer and the black legislator exchanged pleasantries then got down to business: “What’s the rush,” asked the cop, congenially.

“I’m just trying to get home,” Coleman said, alternately saying he was unaware he was doing 94 mph, or that he did not know 94 mph was illegal.

The trooper said he was going to let him off with a warning, which was the same thing another cop in another county did the year before. The trooper reminded the legislator that if he had received tickets instead of warnings, he would have lost his license.

Coleman denied it was a state car.

“You got state plates on it.”

“I understand what you are saying, speed got away from me,” Coleman said. “But I am not a child.”

Then Coleman was on his way. Ticketless.

After the video came out, constituents by the hundreds took to Coleman’s Facebook page and other internet outlets to blast him for lying about the cop, his sense of entitlement, and how he should have received a ticket for driving dangerously fast.

All caught on camera.