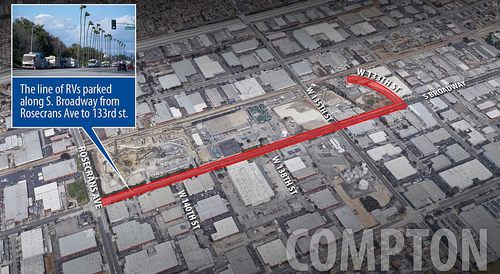 In the Illegal Alien "Sanctuary State" of California, Thousands of American Citizens Live in RVs Because They Can't Afford Housing.

The formerly Golden State of California is a "sanctuary state" for illegal aliens. Yet in the same state, thousands of our fellow Americans can't afford housing and are living in RVs.

What's wrong with this picture?

A federal appeals panel has upheld California's controversial "sanctuary state" law, ruling that the measure does not impede the enforcement of federal immigration laws in that state. A three-judge panel of the U.S. 9th Circuit Court of Appeals, in a unanimous decision, found that the state law, known as SB 54, limiting cooperation between state and local law enforcement and federal immigration authorities does not conflict with federal law. The judges said they "have no doubt that SB 54 makes the jobs of federal immigration authorities more difficult." But "California has the right ... to refrain from assisting with federal efforts."
Federal Appeals Panel Upholds California 'Sanctuary State' Law, by Richard Gonzales, NPR, April 18, 2019

California's AG Xavier Becerra (of whom I've written before, see here) was quoted.

California Attorney General Xavier Becerra praised the ruling. "We continue to prove in California that the rule of law not only stands for something but that people cannot act outside of it," Becerra said in a statement.

Meanwhile, in the "sanctuary state" of California, things aren't going so well for many American citizens. I guess it's not a sanctuary for them.

From the the UK's Daily Mail:

RVs are everywhere and anywhere around Los Angeles – clusters of them on residential streets, in industrial parks, near high schools and church parking lots. There are thousands of them, dotted around the city and the county, in a trend that’s impossible to miss – and one that extends across the Golden State. From Palo Alto to Sacramento and San Francisco, the proliferation of RV and vehicle living has become more and more obvious in recent years against a backdrop of complex socioeconomic issues.
Skid Road: How California's army of homeless has turned the state's richest boulevards into RV parks as exorbitant rents force families and full-time workers to live on four wheels, by Sheila Flynn, Daily Mail, March 22, 2019

The article includes plenty of photographs. Take a look.

Many of these are not holidaymakers or pleasure seekers; in fact, thousands of RV dwellers are homeless. And their numbers are actually difficult to quantify. California, which is home to 12 percent of the US population, also hosts a disproportionate amount of the nation’s homeless at 22 percent. But many do not fit the stereotype of homelessness; they don’t have drug or alcohol or psychiatric problems. They are employed, just not making enough to afford the state’s still-rising rental prices. Some don’t consider themselves homeless at all, simply viewing the unorthodox housing choice as just that – a choice, and a cheaper one.

An entirely new cottage industry of RV and vehicle landlords has cropped up to fill the demand, renting out everything from bunk beds to box trucks to people who earn far more than minimum wage.

This is in California, remember, a "sanctuary state" for illegal aliens.

And a growing wave of resentment is spreading across the state just as quickly as the trend in vehicle living itself. The topic is ubiquitous at town council meetings from San Diego to San Francisco, as residents toss out a variety of complaints – everything from trash and unsanitary conditions to drug dealing and, simply, the fact that they consider parked campers in residential areas to be eyesores that bring down the value of their suburban communities.

Yes, it does cause problems. But it's a result of other problems. Why is California a "sanctuary state" for illegal aliens and why does our country keep bringing in so many immigrants?

In Los Angeles, 2018 data recorded 45,043 homeless people last year, according to the city’s Homeless Services Authority. Seventy-five percent of those people were in unsheltered accommodation, with 3,814 people in cars, 3,554 people in vans and 8,380 in RVs and Campers. But getting accurate data in cities like Los Angeles and across the entire state has its complications, says Russ Heimerich, deputy secretary of communications for California’s Business, Consumer Services and Housing Agency. The figures are usually based on point and time counts, when staff go out in January to ‘look for people who are demonstrably homeless.’ ‘They go to the shelters, but you’re not going to stop and knock on somebody’s RV necessarily and say, “Are you here because you’re camping in a Walmart parking lot because you’re cruising the country, or are you here because you got placed out of your home?” Those point in time counts probably wouldn’t catch those.’ He tells DailyMail.com: ‘One of the major causes of homelessness is, frankly, the high cost of housing in California, and so we are working on initiatives to get local governments to approve and plan for housing and make it easier to plan for developers who want to build housing to do so.’

Yes, "the high cost of housing".

He adds: ‘Many, many families in California are one pay check away from being homeless. They lose a job or they have a sudden medical emergency where they have to use the money for hospitalization or doctors or whatever, instead of paying the rent … in California, anyway, and I suspect elsewhere, there is a large percentage of the homeless who are those people who have had that one disaster and can no longer afford to pay rent.

So Heimerich is talking about people who aren't unemployed but they can't afford housing. There's something seriously wrong with that.

The problem has become so widespread that grassroots organizations and other efforts have sprung up to provide safe parking places for such displaced individuals. It’s actually illegal in many parts of California to sleep on the street in a parked vehicle, so many of the working homeless face fines, tickets and being moved on by police – contributing to the mobile nature of parking sites and the fact that rarely more than a dozen vehicles are parked together at any one time.

So it's illegal to sleep in a parked vehicle but it is ok for California to be a "sanctuary state" for illegal aliens?

Emily Uyeda Kantrim is a program director for SafeParkingLA, a non-profit which accepts applications daily from people looking for guarded, specifically identified and often secret locations to park and sleep. In a 30-day period, she tells DailyMail.com, her organization gets about 250 applications. ‘Of those, about 100 are homeless for the first time and not connected to any other services,’ she says. ‘They don’t know about homeless services; maybe to them that means going to a physical shelter and having to stay there for whatever reason. Out of that 100, 60 are under the age of 40 and have a job – so that was a new statistic that no one else has really dialled down into before.’ She says: ‘We’ve seen – and this is borne out in other statistics as well – more young people who are just excluded from the rental market due to the cost, as well as seniors who are on a fixed income and who are being displaced from their historic communities.’

She tells DailyMail.com: ‘I can tell you that out of the number of people who contact us who are in RVs, these are people who primarily have felt they have no way back into housing. A family will call and say, “What do you have out here, because we have been displaced from our neighbourhood; we can’t afford it anymore. So we bought this RV so our kids can go to the same school.”

‘People are trying to make peace with the reality of their situation by trying to do something; they don’t realize it’s not legal to park your RV on a regular city street and sleep in it.’

Another issue with figuring out the scale of the problem – and fixing it – is that many people do not want to admit they are homeless or even think of themselves as homeless in the first place, instead considering their transient living a lifestyle choice and a true home.