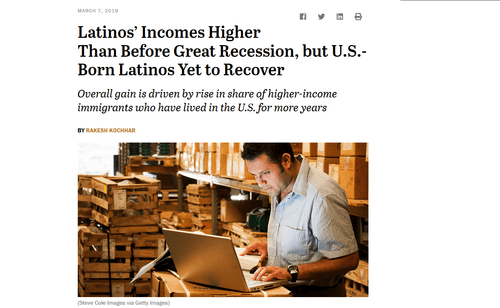 American-Born Latinos Have Been Hammered Economically

On the surface, a similar recovery appears to be underway for Latino workers.2 Their median personal income rose 5% from 2007 to 2017. But the overall gain masks a sharp contrast in the experiences of U.S.-born Latinos – whose incomes in 2017 were 6% less than in 2007 – and of foreign-born Latinos, whose incomes were 14% higher than in 2007, according to a new Pew Research Center analysis of government data. …

Demographic change, not the economic recovery, is the major driver of the gains for Latino immigrants. A slowdown in Latin American immigration led to a steep rise in the share who have lived in the United States for at least 10 years.

In other words, Latino immigrants messed up badly during the Housing Bubble, so some went home and newcomers stayed away for a number of years until the Central American flood got going about a half-decade ago. Fewer new immigrants means immigrants will have higher average incomes.

But, American-born Latinos aren’t particularly assimilating toward economic parity, which is bad news for America’s long run. You have fewer ethnic tensions if different ethnicities achieve about the same. There’s not much evidence that future generations of Latinos will reach equality of achievement.

The most obvious thing to do for Latinos who are our fellow American citizens is to lessen the economic competition they face from illegal sources by cracking down on illegal immigration. But as Democrats and billionaires keep telling us, that would be racist.