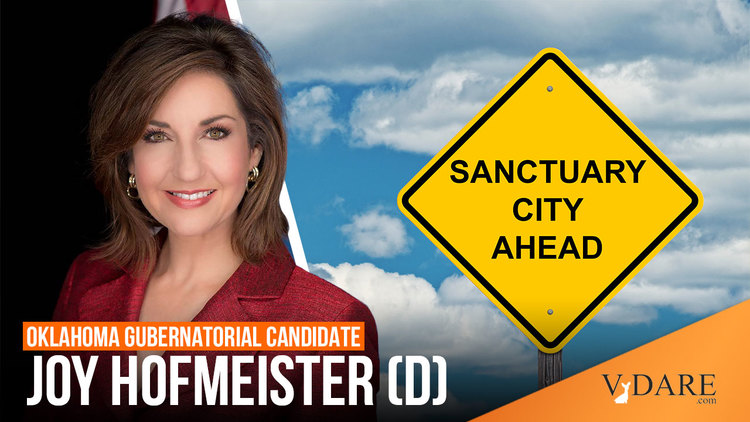 I recently blogged about the Oklahoma gubernatorial election, in which Governor Kevin Stitt is running for reelection and wasn’t looking so good in the polls.  The Stitt campaign has scheduled a rally for November 1 with Ted Cruz.

“You talk about immigration, are you in favor of sanctuary cities?” Hofmeister was asked in a video of the event.

“Yes,” Hofmeister replied. “And I believe it is important that we treat people with dignity and with respect.”

Well, there you go, she doesn’t even try to hide it.

The Hofmeister campaign did not respond to the Daily Caller’s request for comment.

Under Biden, the whole country has become an illegal alien ”sanctuary.” However, to openly support the policy certainly  tells us where a politician stands. Does she think it helps her politically?

After all, Oklahoma was recently the scene of a literal axe murder committed by an illegal alien.   That ought to be an issue.

Was James Patterson, the 22-year-old victim of that axe murder, treated with, in the words of Joy Hofmeister,  ”dignity and respect”?  Somebody ought to ask her about that.