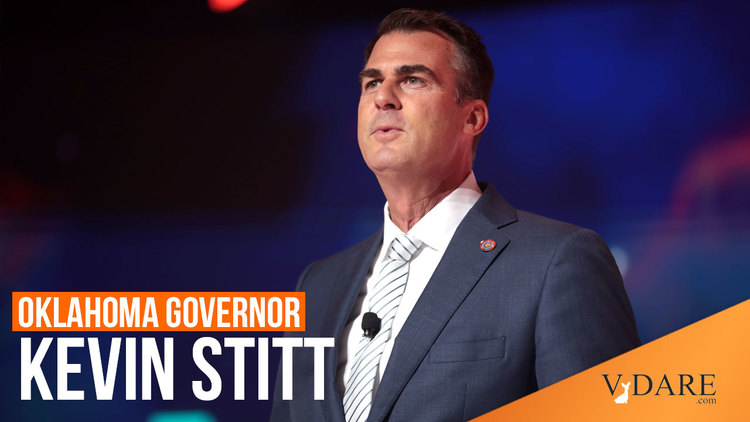 Oklahoma is a very red state. Since 2004, every single one of Oklahoma’s 77 counties has voted for the Republican presidential candidate.

And yet, Oklahoma Governor Kevin Stitt’s re-election bid does not look like a given. His opponent is another state official, education superintendent Joy Hofmeister, elected to that post as a Republican but who switched to being a Democrat during her term.

The Republican Governors Association is worried enough to start pumping money into the election.

Republicans are looking to avert an upset in Oklahoma’s gubernatorial race as polls show a closer-than-expected contest less than three weeks out from Election Day. Gov. Kevin Stitt (R) has seen the gap in recent surveys close between him and opponent Joy Hofmeister, who’s aiming to become the first Democrat elected to statewide office in the Sooner State since 2006. In a sign of how the dynamic has shifted, the Republican Governors Association (RGA) launched a major ad buy in the state this week attacking Hofmeister. “That the RGA’s out there with a million dollars three weeks out tells you that their polling is showing what everything else is showing,” said Chad Alexander, a former chair of the state Republican Party and GOP consultant. “I don’t think they would spend a million dollars for no reason.” [GOP looks to avoid upset in Oklahoma governor’s race, by Jared Gans, The Hill, October 22, 2022]

Hofmeister has served as the state’s superintendent of public instruction since 2015. She was elected to the position twice as a Republican but changed her party registration to Democrat last year.

There hadn’t been a Democrat in state office since 2011. Hofmeister was elected as a Republican but switched to the Democrats in 2021.

One poll showed Hofmeister leading by 7 points, and multiple surveys have shown the candidates locked in a tight race within the margin of error. Republicans acknowledged the race appears headed for a photo finish, but they expect Stitt to pull through.

Stitt’s campaign told The Hill in a statement that the governor will win the race because of key differences between the candidates. An ad from the campaign and the one from the RGA seek to tie Hofmeister to President Biden and claim both support gas tax increases as supply issues remain, which would cost Oklahoma jobs.

The RGA similarly sought to tie Hofmeister and Biden in a statement provided to The Hill.

“The difference between Joy Hofmeister’s and Joe Biden’s plans for Oklahoma are negligible — both want to push a radical agenda on students and make it harder for families to put food on the table,” said RGA spokesman Will Reinert.

So the Stitt campaign wants to associate Hofmeister with Biden. On the other hand, Joy Hofmeister presents herself as ”an aggressive moderate” not controlled by the Democratic party.

Still, recent surveys have shown Stitt’s approval rating underwater this year, with 42 percent of Oklahomans approving of his job performance and 52 percent disapproving in a poll earlier this month.

Alexander said no one issue is responsible for the tight race, pointing instead to a combination of factors.

Education has been a central issue in the race as Stitt has made supporting school vouchers a major part of his campaign. Stitt promoted school voucher legislation during the past legislative session, but the bill failed.

There’s also a hot race for Hofmeister’s replacement as Superintendent of Public Instruction. Republican candidate Ryan Walters is under attack from the state’s education establishment, but a recent poll shows him leading Democrat candidate Jena Nelson, 52-43.

Alexander said the bill was unpopular in rural parts of the state because it would have pulled money out of the state funding formula, causing major budget cuts for the schools in those areas. In many cases, rural students in Oklahoma do not have any other options of nearby schools they could attend, so the voucher program would not help them.

“In rural Oklahoma, a lot of times the schools are the lifeblood of those communities,” Alexander said.

That’s certainly true. But the anti-Walters campaign is using that angle to fearmonger the public.

Hofmeister did well in the debate, while Stitt repeated the same talking points and came across as overconfident. The question is, how will the candidates appear to middle-of-the-road voters?

Hofmeister also attacked Stitt over crime, in a notable reverse of the trend seen in other races, where Republicans have hammered their Democratic opponents over the issue. During the debate, she claimed Oklahoma had a higher violent crime rate than California and New York, something Stitt denied. However, data from the Centers for Disease Control and Prevention appears to back up her argument.

Amid all of this, Stitt has been in a public feud with Native American tribes in the state, several of which have waded directly into the governor’s race in a major break from tradition.

Part of this is over McGirt, the ridiculous 2020 Supreme Court decision which wound up with 43% of Oklahoma being declared Indian reservation land, an obvious falsehood. (See here and here).

But Stitt (a Cherokee Nation member himself) was already wrangling with Indian leaders over casinos.

More from the article: ”Earlier this month, five of Oklahoma’s largest tribes issued a joint endorsement of Hofmeister, a surprise move that came after Stitt ended hunting and fishing license agreements with the Cherokee and Choctaw nations; opposed a Supreme Court ruling that found a large part of the state should remain tribal reservation; and unsuccessfully attempted to renegotiate the state’s share of casino revenue with tribes, which exclusively operate casinos there.”

I think it’s likely Stitt will still win the election, but on the other hand, Overconfidence is a Killer.