Presidente of Mexico and general bottom feeder Felipe Calderon is cheered up considerably by recent political events in America. He is rubbing his grubby hands together in glee as a result of the disappearance of the last Presidential candidate who can be considered pro-borders, Mitt Romney.

Plus, Calderon is planning a visit to Mexifornia next week to check on his outsourced citizens who supply billions of dollars annually in remittances (nearly $24 billion in 2007, see below). Hopefully he will get the kind of welcome he deserves.

"My hope is that whoever the next president is, and whoever is in the new [U.S.] Congress, will have a broader and more comprehensive view" of the immigration problem, Calderon said. Speaking at the presidential residence Los Pinos on the morning after the Super Tuesday presidential primaries in the U.S., Calderon said he took heart from the results, though he did not mention specific candidates.

"It seems to me that the most radical and anti-immigrant candidates have been left behind and have been put in their place by their own electorate," Calderon said.

He arrives in Sacramento on Feb. 13 on the final leg of a five-day U.S. trip that will also take him to Chicago, Boston and New York to visit local officials and representatives of Mexican immigrant communities.

In Sacramento, he is scheduled to meet with Gov. Arnold Schwarzenegger and Latino legislators. In Los Angeles the following day, he is to meet Mayor Antonio Villaraigosa and migrant groups' representatives assembled by the nine Mexican consulates in California. [Mexican president foresees friendlier U.S., Los Angeles Times, Feb 7, 2008]

Plus, Calderon is still yapping for his handout of free money from Uncle Sucker, which will total $1.4 billion over a couple years rather than the sub-billion amount mentioned in La Times.

U.S. legislators are debating a $550-million proposal by the Bush administration to assist Mexico and Central America in the battle against traffickers.

Below, a chart showing the growth of remittances over the last few years. 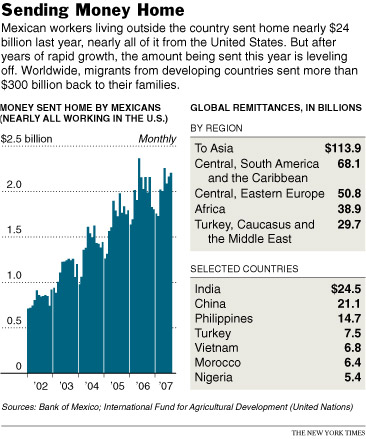