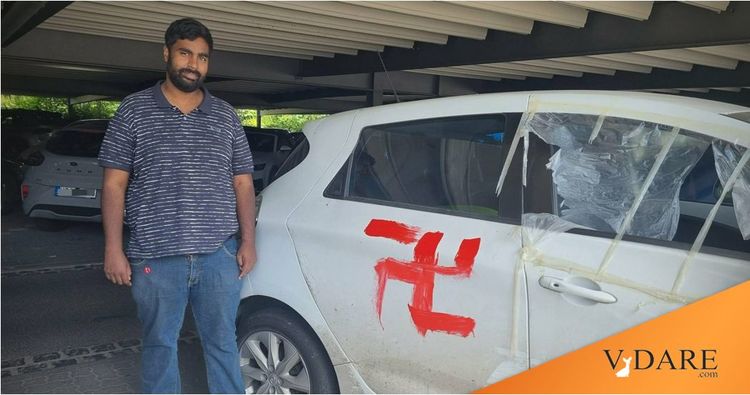 Looks like America doesn’t have a monopoly on ”Hate Hoaxes.”  In Germany, Manoj Subramaniam, a Green party politician whose parents immigrated from Sri Lanka, has perpetrated a series of spectacular hate crimes against himself.

The alleged death threats from neo-Nazis against Green politician Manoj Subramaniam have made headlines across Germany and led to tension in North Rhine-Westphalia, Germany’s largest state by population. However, the councilor from Erkelenz staged the various threats in an elaborate scheme, according to the result of an investigation published by the public prosecutor’s office.

And this wasn’t just one incident. Herr Subramaniam had pulled off an entire series of hate hoaxes.

The 33-year-old, whose parents immigrated from Sri Lanka, had submitted numerous complaints. First, his car windows were smashed, and swastikas sprayed on the vehicle. Another time, he claimed SS runes and a swastika were drawn on the doorbell of his house. Then, he revealed that a swastika was scrawled on the sidewalk in front of his apartment and that he found razor blades in the mail. The politician also received death threats signed by NSU 2.0, referring to the National Socialist Underground (NSU) group that committed a number of murders across Germany for years.

“Right-wing extremists are threatening political volunteers to silence them. Thank you, Manoj Subramaniam, for not being silent and raising your voice,” stated Lamya Kaddor, a member of the Bundestag. [According to Wikipedia, she’s from a Syrian family.]

However, the evidence now shows that not a single threat was real, according to German news outlet Focus.

Now that the truth is out, has Bundestag representative Kaddor condemned the hate hoaxes?

“As part of these investigations, the suspicion was confirmed that the reported crimes did not occur, that they were faked, and that there was no threat. Search measures and an interrogation of the accused have confirmed this suspicion,” the Aachen police reported.

Police and prosecutors are now investigating Subramaniam. The politician resigned his mandate over the weekend and also resigned from the party.

But, as the article points out, this is not the first time this has happened in Germany:

Germany has been beset by a number of hate hoaxes over the last few years, including a case involving popular Israeli singer, Gil Ofarim, who prosecutors say lied about an alleged anti-Semitic incident inside the Leipzig Hotel Westin. The case originally sparked an outcry about anti-Semitism in Germany before a video disproving his allegations was released.

There was also the Sebnitz case where a mob of skinheads supposedly drowned a toddler only for it to turn into one of the biggest debacles and hate hoaxes in Germany’s modern history. And the case in Mittweide, where police determined that nobody actually ended up having a swastika carved on their forehead (police later proved the alleged victim in the case did it herself). In Müglen, foreigners were not hunted on the streets despite national press reports claiming otherwise, and in Chemnitz, the same accusation that sparked a nationwide outcry has never been proven.

And check this one out:

Meanwhile in Dresden, an Eritrean asylum seeker was not murdered by right-wing extremists from the Pegida movement, but killed by a fellow Eritrean.

Here’s how Tom Pappert of Valiant News entitled his article on the subject: German Jussie Smollett: Politician Resigns After Authoring Own Nazi Death Threats—it features a proud-looking Herr Subramaniam standing next to his car with a big red swastika on it.

As frequently happens in these cases, the symbol is drawn backwards.