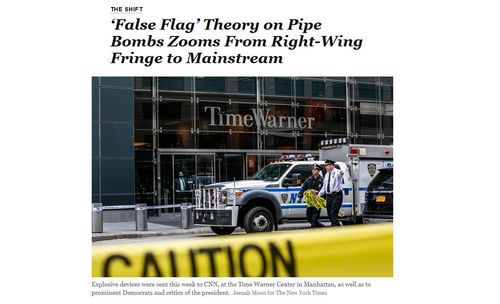 I haven’t had anything to say about the letter bombs in the news because I’d prefer to wait around and find out what is going on. Also, I don’t think it’s a good idea to hang an election on what (probably) one or two unknown bad people got themselves up to.

But, from the New York Times news section, some meta-coverage:

Just hours after the news broke this week that explosive devices had been sent to Bill and Hillary Clinton, Barack Obama and other prominent Democrats, a conspiracy theory began to take shape in certain corners of conservative media.

The bombs, this theory went, were not actually part of a plot to harm Democrats, but were a “false flag” operation concocted by leftists in order to paint conservatives as violent radicals ahead of the elections next month. …

Conspiratorial thinking has always been with us — the grassy knoll, the moon landing, the Freemasons. But it has been turbocharged in the Trump era, as cable news networks and pliant social media networks allow hastily assembled theories to spread to millions in an instant. Often, by the time the official, evidence-based explanation has taken shape, it has already been drowned out by a megaphonic chorus of cranks and attention-hungry partisans.

“The process by which something gets called a false flag has accelerated,” said Anna Merlan, the author of “Republic of Lies,” a coming book about conspiracy theories.

Commenter Malcolm X-Lax points out that you can tell that Anna Merlan is an authoritative, level-headed expert because she was the author of a Jezebel article denouncing skepticism about Sabrina Rubin Erdely’s gang rape on broken glass story:

‘Is the UVA Rape Story a Gigantic Hoax?’ Asks Idiot

The New York Times has repeatedly publicized incidents as proof of a vast tide of pro-Trump violence that have instead turned out to be more or less hoaxes. But, conveniently, it has never allowed itself to admit there is a thing called a hate hoax. There just isn’t, so don’t let yourself notice the pattern.

The subtle difference in implication between a False Flag and a Hate Hoax is that “a false flag operation,” such as the Lavon Affair, implies some organized effort and competence, while the typical “hate hoax” that galvanizes the prestige press is often a self-evidently pathetic incompetent improvisation: e.g., quasi-swastikas that look like dyslexic cacti or a tall tale of a fraternity initiation ritual gang rape on broken glass. Local cops frequently dismantle hate hoaxes that have the national media in a frenzy by just asking basic cop questions. (E.g., Jackie Coakley talked to Rolling Stone for hours but refused to ever talk to the police.)

These letters bombs appear to fall in the medium range in terms of effort: they obviously took more effort than that the usual stupid hate hoax stunt that makes the front pages, like writing a racial slur on a door in the Air Force Academy. So that strikes me as making it more likely that this really is a right vs. left thing rather than a left vs. right hoax, since in this century, rightists seem to put more skill into doing bad things than leftists do.

On the other hand, these mailings aren’t exactly Operation Mincemeat when it comes to planning and verisimilitude.

Another category worth keeping in mind that is not exactly a false flag operation is terrorism carried out under the influence of agent provocateurs. For example, a couple of sets of people have been sent to jail for terrorism plots involving Shahed Hussain, the owner of that limo that killed 20 people in upstate New York recently, who was on the FBI payroll.

And sometimes, those questioning the most apparent motives turn out to be justified.

Last year, a string of bomb threats against Jewish institutions in the United States was thought to be an act of anti-Semitic intimidation until police apprehended a Jewish teenager in Israel, whom they suspected of making the threats. The 2016 mass shooting at the Pulse nightclub in Orlando was thought to be an anti-L.G.B.T. hate crime until further evidence suggested the shooter had no idea it was a gay club.

But these are just random occurrences. Just like how the UVA gang rape on broken glass mishap was a boring story about methodological shortcomings in journalistic procedure rather than a hilarious illustration of the bias-driven stupid prejudices pervasive in the press. There is No Pattern at All of the media having a credulous hunger for examples to illustrate The Narrative. No Pattern!

… Other theories have taken root among his followers — like Pizzagate, QAnon and the baseless, sensational claims made about Christine Blasey Ford, the woman who accused Justice Brett M. Kavanaugh of sexual assault — often without official censure.

Speaking of “sensational claims,” how is the hunt for Christine Blasey Ford’s corroborating evidence coming, anyway? Can we expect it before or after O.J. finds the real killers?

But enough of that, back to the New York Times’ nonstop coverage of White Privilege and Implicit Bias, which are totally not conspiracy theories in the slightest. Also, more BBQ Beckys! What’s behind the vast national outbreak of news stories about evil white women oppressing blacks?

An interesting dog that doesn’t bark in this NYT article is that there is no mention of Republican conspiracy theories about how Democrats must be funding The Caravan, which would seem like a particularly inane conspiracy theory since The Caravan is likely doing the GOP some good.

A NYT article yesterday theorized that The Caravan is, indeed, a leftist conspiracy, but not of American leftists, but of Honduran leftists angry over a recent disputed election down there.

That could be, but it’s worth noting that illegal alien caravans out of the Banana Republics have been a regular occurence in recent years. The last couple have gotten more publicity as immigration skeptics have gotten more sophisticated and have gotten better platforms in the U.S. media, with Trump and Tucker Carlson being the most influential. But similar things were going on on a smaller scale before many people in the U.S. noticed.

Is that my conspiracy theory? Maybe, although a lot of my theories about how the world works don’t involve conspirators meeting in parking garages at midnight and brainstorming complex plans. Instead, people notice what other Good People like themselves are thinking and are influenced by it.

There’s been a vast amount of chatter on Twitter among the Good People about how there is too much media coverage of something as trivial as a mob marching toward the United States instead of the really, really important world-historical events like BBQ Becky.