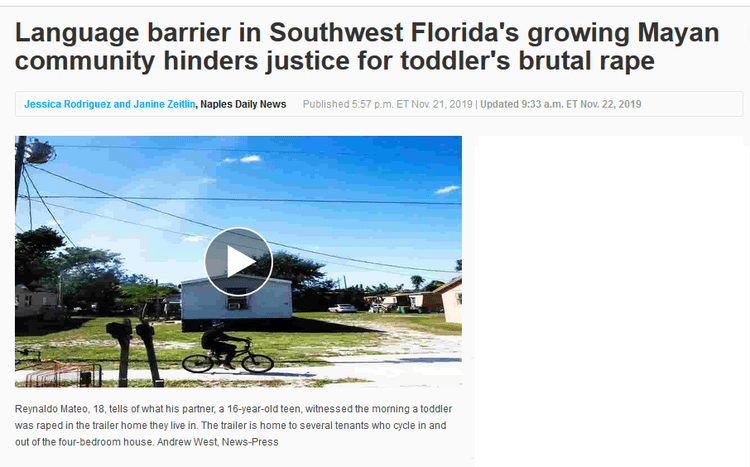 In Florida, Guatemalan Child Raped by Fellow Guatemalan Who May Never Be Apprehended by Florida Police

This is a sick story, about the rape of a small child. The perpetrator has not been brought to justice. What makes it so complicated is that it occurred in the Guatemalan colony of Florida, where many Guatemalans speak Mayan languages, which makes it hard to communicate with outsiders.

Of course, that might be an advantage for a criminal trying to hide out from authorities.

It’s a sick story of the rape of a small girl in the growing Mayan community in that part of Florida.

Here’s how the article begins:

A child’s cry pierced the trailer home before dawn.  The sound awoke a teenage girl, one of the Guatemalan immigrants crowded into the four-bedroom trailer in a farmworker community an hour outside Naples. She opened the bathroom door to see a man holding a toddler. Both had blood running down their legs. The 16-year-old rushed back to the room she shares with her boyfriend and locked the door. Soon the knocking began. It had to be the man, she thought. She didn’t dare open it, worried he would hurt her. She didn’t know how to contact police.

Like others in the trailer, the teen had arrived in the Immokalee community only months earlier from Huehuetenango, a rural and impoverished region of Guatemala where ancient Mayan languages are still spoken. Her primary language was the Mayan language Mam.

Authorities said the language barrier has stymied the hunt for the attacker. More than a month later, no one has been arrested for the rape, which was so brutal the toddler needs multiple reconstructive surgeries.

The crime reveals how language and culture can hinder justice.

No kidding. So why are we allowing this?

In Southwest Florida in the last 15 years, other high-profile crimes — a slavery case in Cape Coral and a child bride case in Bonita Springs — were concealed for a year or longer within the Guatemalan community, even when authorities were involved. Girls were the victims.

Language is part of the problem. But it also may be that members of the "Guatemalan community" are protecting their own criminals.

It took a month for authorities to make any arrest in last month’s rape in Immokalee. The toddler’s father, Hector Gabriel-Jimenez, was arrested Nov. 7 on a felony child neglect charge. He told Collier County sheriff’s deputies he brought the child with him from Guatemala so he would "not have any problems with immigration for entering the U.S.A. illegally."

If he brought the girl with him to ease immigration, he would be just one case in a surge of so-called family units arriving at the southwestern border since 2018.

Remember all those reports of immigrants bringing children to get them in and prevent their deportation? Well, this father and daughter were part of that wave.

Would that little girl be worse off in one of Trump's "cages?" It would have saved her from being raped.

The father and child, as well as the teenage couple and many others in Immokalee, are part of a growing immigration wave from Guatemala to Southwest Florida. Many come from rural Guatemala for agricultural work in Immokalee, an epicenter of winter tomato production in the United States.

So cheap labor profiteers want to pay less for their tomato crops, and this results.

The Guatemalan population in Collier and Lee counties has swelled from about 3,000 in 2000 to 14,000 in 2015, according to the latest Census estimates.

There are signs many of them are Mayan, a people who have long faced poverty, violence and discrimination in their own country. Spanish is taught in schools, but many indigenous people speak a Mayan language at home.

So in about 500 years, these Mayans have not integrated into Hispanic society. And now they're going to integrate into ours?

Just in the last three months, interpretation for a Mayan language was required for 70 Collier and Lee circuit court cases. The two most commonly needed were Mam and Qanjobal.

Wow, these immigrants have been involved in a lot of court cases then.

Note too, that there is not just one Mayan language...

Nationwide, three of the 20-plus Mayan languages ranked in or near the top 10 most common languages spoken last year in U.S. immigration courts. Mam reached ninth and Quiche 11th, according to the Executive Office for Immigration Review. In 2014, Mayan languages barely broke the top 20.

So in addition to the other languages our government deals with, it now has to deal with several different Mayan languages.

Yet there’s a scarcity of professional Mayan interpreters. In the Immokalee case, authorities had to fly in an interpreter from California to learn enough to file an arrest warrant for the father.

This is getting more expensive all the time.

Carmelina Cadena, of LaBelle, is the founder of Mayainterpreters.com and one of the few professional Mayan interpreters in Southwest Florida.

“We’re doing the best we can, but there are also things that tie our hands.”

The article quotes a leader of the local Mayan community.

Marta Sicajan is one of few visible Mayan leaders in Southwest Florida. She cried when she saw the news of the brutal rape.  “How could there be such monsters, human beings that call themselves people that are capable to hurt a little girl, an innocent being, in this way?” Sicajan emigrated from Huehuetenango at age 17 by way of a smuggler. Three decades later, she leads the local empowerment and cultural group Espíritu Maya.

She felt shame the father came from Guatemala, where she’s seen child abuse go unreported. Governmental officials have a reputation for being corrupt, and people fear authorities won’t carry out justice, she said.

Mayan people may not report crimes here for other reasons.

“It’s fear of deportation. It’s fear of not knowing the laws,” she said. “When you know your language is limited, if you don’t understand, it’s scary. You feel like you won’t understand so you prefer not to even start the dialogue.”

There's more in the article, if you want to read it.

Thanks to cheap labor profiteers, open borders activists and assorted virtue signallers, Florida has a Guatemalan colony, a large portion of which speak various Mayan languages, in which a neglectful father who used his child as a prop to get into the county allows her to be raped by a fellow Guatemalan who is still at large.