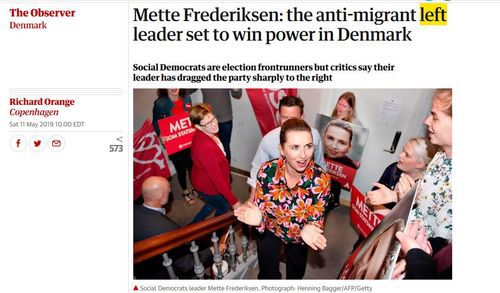 In Denmark, Even Left-Wing Parties Are Becoming Anti-Immigration

Paul Nachman alerted me to this Powerline item by John Hinderaker: Immigration Immigration Skepticism: It’s Not Just For the Right Anymore, May 12, 2019.

We have been writing for years about the fact that any European who expresses skepticism about the wisdom of mass immigration is immediately branded “far right,” no matter what his other views may be. This has had the unhealthy effect of driving voters toward parties that, in some cases, have indeed been unsavory. But it was probably only a matter of time before “mainstream” parties would see the writing on the wall.

That is happening in Denmark, currently governed by a conservative, immigration-skeptic coalition. With an election around the corner, the front-runners are the Social Democrats, who are stealing the right’s thunder on Islamic immigration...

It's a Guardian story (Mette Frederiksen: the anti-migrant left leader set to win power in Denmark) so the writer doesn't really think either side of the political aisle should be allowed to oppose mass immigration, let alone both. The thing is, Denmark, like a lot of Scandinavian countries, has until recently been governed by liberal governments.

The successes of the Danish People's Party (Dansk Folkeparti) has come from the fact that these days, "liberal" means mindlessly pro-immigration.

But there's no reason both sides of a country's political divide can't be patriotic. This used to be the way it was in America.

In a democracy, the voters will eventually get what they want. And Danish voters have made it clear they are not interested in becoming Libya North.