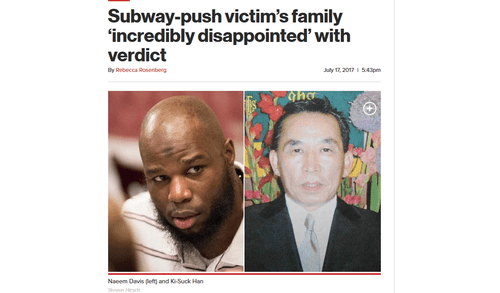 Black Subway Shovers And East Asian Shovees—Is This A Pattern? Are We Allowed To Know?

One variety of lunatic we get in New York City is the Subway Shover. This is the person who picks a random stranger on the subway platform and shoves them into the path of an arriving subway train.

Here's one of them: 33-year-old Melanie Liverpool. Back in November of 2016 Ms. Liverpool shoved 49-year-old Connie Watton into the path of a train, causing her death. Just a month ago Ms. Liverpool was sentenced to 20 years to life in prison for that. Early Wednesday she was found dead in her jail cell, apparently a suicide.

Ms. Liverpool, the shover, was black. Mrs. Watton, the shovee, was East Asian. This, it seems to me from years of reading these stories, is a common pattern. I should dearly like to see statistics on perp and victim for subway shoving, broken down by race on both sides. I'd guess that black shover of Asian shovee is far the commonest situation.

The NY POST, which I have been known to call "America's Newspaper Of Record", has a tag on Subway Shover stories, in the same way that VDARE.com has a tag on "Not Reporting Race"(See it at https://nypost.com/tag/subway-shoves/)

This tag, which  has over a hundred stories, bears out the disproportionate black shover/Asian shovee hypothesis.

Of course, if anyone has collected such statistics, they would never dare publicize the data. That would be hateful and wrong.