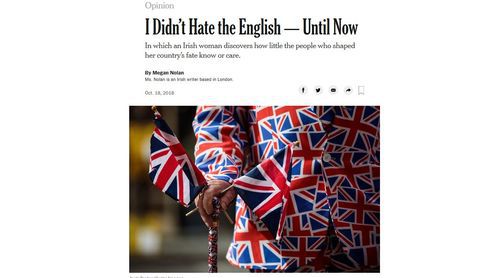 A Representative NYT Op-Ed Of The Current Year: Gradually, I Began To Hate The English

From the New York Times opinion section, yet another essay by a woman on the joys of hate (as long as the Hated are below her in the intersectional pecking order to ensure that she is Punching Up):

I Didn’t Hate the English — Until Now

In which an Irish woman discovers how little the people who shaped her country’s fate know or care.

By Megan Nolan
Ms. Nolan is an Irish writer based in London.

This is a hilariously representative Current Year op-ed in which a woman writer explains why she hates some demographic group that it is okay to hate these days due to the Theory of Intersectionality. It starts with some Twitter/Youtube inanity, the Decapitated Pigeon Incident, and goes on from there in the now predictable paths.

… “The footage shows a man verbally abusing protesters, before the head of a decapitated pigeon is thrown,” but no explanation was forthcoming. Why did the man throw a pigeon head at the protesters? More important, why was he carrying one in his pocket, ready, seemingly, to be launched as soon as a worthy adversary appeared?

Let me guess … hmmhhmm … it involved English tourists and the city of Dublin … okay, I’ve got it! Here’s my solution to the Decapitated Pigeon mystery: Drink was taken.

But stranger still — or perhaps, upon reflection, not strange at all — was the gap between the English and the Irish when it came to interpreting the Pigeon Incident. While Irish people complained on Twitter about these brash bird-head-wielding English tourists coming to our country and performing their odd little colonial pantomime, sensitive Britons were eager to ask why it mattered that the men were English. They’re just louts, they said. Why does it matter where they’re from? After all, all that occupation business was so long ago.

But the Irish woman who “is based” in London has a reason for growing in hate of the English: they don’t pay enough attention to the Irish, such as, well, her:

… The extent to which many English people are ignorant about Ireland has become painfully clear. …

In the midst of all this, I’ve noticed a tonal shift in the way I and other Irish people speak about the English. Our anger is more sincere. We are more ready to call them out on all those centuries of excess, more likely to object to those pink-trousered, pink-faced dinosaurs who still perceive us as their inferiors. I found myself genuinely breathless with anger

Women op-ed writers seem to be competing lately for the most alarmingly physical descriptions of their anger: e.g., Minutes after Kavanaugh was confirmed, the paramedics declared me legally dead from rage-induced coronary thrombosis. I only came out of the coma this morning and immediately began typing this op-ed.

when I read the Conservative M.P. Andrew Bridgen’s recent comments assuming he would be entitled to an Irish passport post-Brexit. …

Pay attention to me!

I’ve lived in London for three years. I hadn’t spent much time in Britain before my arrival and had no particular feelings toward the English. I expected them to react to me with similar neutrality. What I didn’t expect was the toxic mix of dismissal and casual disdain. It would have been easier, perhaps, if it was all as overt as potato jokes. But what kills you is the ignorance; what grinds you down is how much they don’t know about the past and, if they do know, how little they care.

Pay attention to me!

Well, at least they didn’t ask to touch her hair.