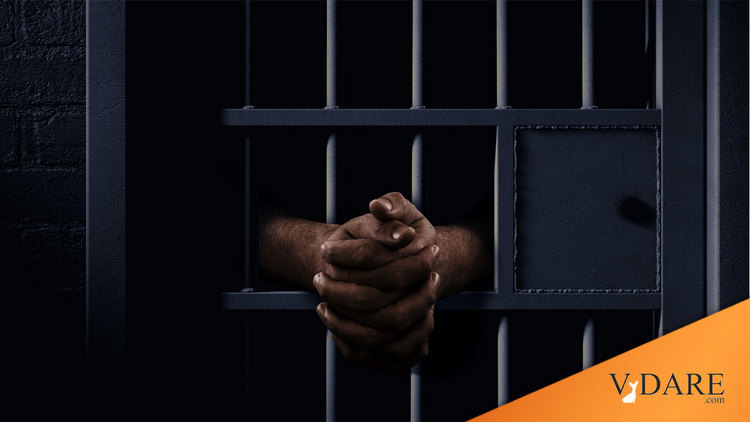 Of relevance to the my post about Matthew Yglesias below,  back in 2001, I wrote for UPI a re-analysis of data in a new report on imprisonment rates in 1997:

The National Center on Institutions and Alternatives (www.NCIAnet.org), a liberal think tank advocating less imprisonment, has released a new report, "Masking the Divide," that argues that, "The overuse of incarceration is causing severe and potentially irreparable divisions in society."

... Nationwide in 1997, non-Hispanic whites comprised 34.8 percent of the prisoners, African-Americans 46.9 percent, Hispanics 16.0 percent, and others 2.3 percent. Overall, the study found that 2.6 percent of the African-American adult population was imprisoned in 1997, compared to 1.1 percent of Hispanics, and 0.3 percent of non-Hispanic whites. The report does not break out imprisonment rates for Asian-Americans, but most experts believe Asians tend to be imprisoned the least of all major groups. ....

Interestingly, crunching the data in the report's appendices sheds light on a number of fascinating topics that did not particularly interest the report's sponsors.

For example, "The Sopranos" television drama has revived New Jersey's reputation as a hotbed of white criminals. Yet, to the extent that a tendency to be law-abiding can be estimated from imprisonment rates, that much-maligned state appears in fact to have the second most law-abiding non-Hispanic white people in America. According to a new report that breaks down imprisonment rates by race and ethnicity, white New Jerseyites trail only the notoriously nice white folks of Minnesota in staying out of prison.

Some findings confirm common sense — for example, whites in fast-living Nevada are more than twice as likely to be in prison as whites in the mostly Mormon neighboring state of Utah.

In contrast, some of the data undermine common myths. Besides polishing the tarnished image of New Jersey's whites, the numbers also reveal the surprising news that politically liberal states, not conservative ones, are likely to have the largest gap between the imprisonment rates of blacks and whites.

These ratios varied significantly from state to state. While one might expect that the highest proportion of black-to-white imprisonment would occur in politically conservative states, the opposite was true. It was in Democratic-leaning states where blacks had the highest rates of imprisonment relative to whites.

For instance, the racial gap in the highly liberal, black-dominated District of Columbia was found to be off the charts. In D.C., a black person is 56 times more likely than a white person to be in prison. The next-largest racial disparities were found in liberal mainstays Minnesota (a 31-times higher rate of blacks being in prison) and Wisconsin (22 times higher), followed by New Jersey, Iowa, Connecticut, Pennsylvania, Rhode Island, and Illinois. All of these states voted for Democratic presidential candidate Al Gore in 2000.

Of course, it's not uncommon for regions that are highly liberal in terms of national politics to vote for conservatives in local elections. For example, the Democratic Party's liberal bastions of New York City and Los Angeles each elected law-and-order Republican mayors in the mid-1990s, following the crack epidemic crime wave that began in the late 1980s.

The smallest difference in the black-to-white imprisonment rate was found in liberal Hawaii (only 2.9 to 1). This may have something to do with many members of Hawaii's small African-American community being active or retired members of the U.S. armed forces.

After Hawaii, though, the next 10 states closest to black-white racial equality in imprisonment rates were all Southern or Western states that voted for George W. Bush. For example, highly conservative Mississippi and South Carolina each imprisoned blacks only six times more often than whites per person, compared to the national average of nine times more often.

Eighteen of the 20 states with the least disparity between blacks and whites voted for Bush in 2000. These below-average racial ratios are driven in part by the tendency of whites in Republican states to get themselves thrown in prison more often than whites in Democratic states. The highest white imprisonment rates tend to be in old frontier states of the Wild West.

The most often locked up whites are in Alaska, followed by Oklahoma, Nevada, Arizona and Texas.