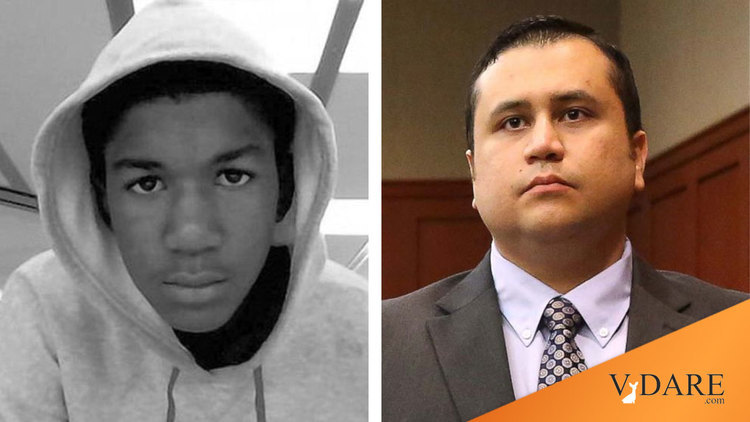 By the way, regarding Matthew Yglesias's admission today in Slate that the two criminals who knocked him down with punches as he walked about a mile north of the Supreme Court building were black ... I've often been accused of racial profiling and racist bigotry (which, in today's dominant narrative are assumed to be identical) for assuming that Yglesias's assailants were black. After all, Yglesias's original account of the apparently random attack didn't mention the race of the criminals.

My reasoning was two-fold:

(Moreover, several months after the assault, he mentioned on his former blog that they were black, confirming my initial surmise, but that blog became hard to search after he moved to Slate.)

Obviously, I was right all along from day one.

But being right is racist.

That's one of the causes of the current vast eruption of liberal white rage — out of all the screwed up stuff that happens on the streets of America every year, the mainstream media picked this incident out to put all their chips on in their condemnation of profiling.

But then, it turned out that Zimmerman's suspicions were highly accurate. As one commenter says, Trayvon Martin turned out to be a petty criminal with violent tendencies and an apparent history of burglary.

Now, in defense of the late Trayvon Martin, let me point out that a lot of guys with Martin's bad but not horrible record at age 17 pull out of this downward spiral before, say, they start engaging in drive-by shootings. A lot of 17-year-olds are surly, greedy, and stupid. More than a few of them wise up as they get older, as they discover that their rap music isn't really good advice on how to live. Martin was reasonably well-poised to wake up to the trajectory he was upon: he didn't come from the bottom of society, but from a pretty average African-American family. For example, he had a father who was still involved enough in his life to haul him out of Miami to get him away from his low-life friends during his school suspension.

But, all this just makes the story more tragic.

The Martin-Zimmerman story should be an occasion for national reflection about the perniciousness of today's dominant stereotypes, specifically:

These two stereotypes have the peculiar disadvantage of being both not true individually and interacting with horrible consequences. White liberal hatred for white conservatives and black love of gangsta rap interact very, very badly.