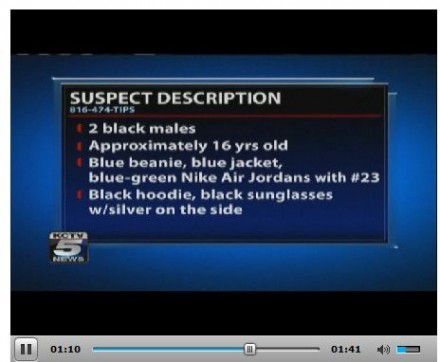 "In An Unheard Of Gesture Of Journalistic Honesty"

The Kansas City anti-white hate crime described by Anonymous Attorney below is also discussed by Lawrence Auster at View From The Right, where he says

"It was so bad that the liberal New York Daily News, in an unheard of gesture of journalistic honesty, gives the race of the perpetrators and the victim in the third sentence of the article."

In a more typical vein, the video linked to the Kansas City Star's story

has footage of a police press conference which includes this PowerPoint slide. KCTV reporterette Amy Anderson [Message her on Twitter] manages to give a description of what the suspects were wearing, including the number on the Air Jordans,  omitting the first line of the description: "Two black males."