If you've read The City that Bleeds: Race, History, and the Death of Baltimore, you know black people in Baltimore carefully protect their city by using black criminality to keep out white people from ever being a demographic threat to run things again. 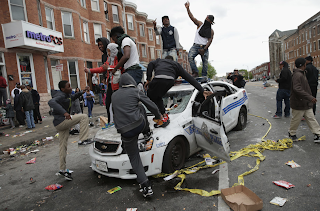 "We gave those who wished to destroy space to do that as well..."

Now elected officials in 70 percent black Baltimore are protecting black criminals from mandatory one-year sentences for illegal gun possession... because it will impact blacks.Now imagine this 70 percent black having black elected officials - representatives of the state - protecting black criminals from a legal system they've deemed not just racist, but replete with implicit bias.Oh, it's true.

Baltimore leaders on Friday proposed a mandatory one-year sentence for illegal gun possession within 100 yards of a school, park, church, public building or other public place of assembly within the city.

The bill would prevent any part of the one-year sentence from being suspended, and preclude those with such convictions from receiving parole.

Mayor Catherine Pugh said she’d like to do more to restrict guns, but “this is what we can do locally” without changing state law.

Pugh acknowledged that there is a church or a school “on nearly every corner” in the city, and said “as it relates to this legislation, that’s a good thing.”

Police Commissioner Kevin Davis praised the bill as a much-needed change to help the city address its soaring violence. The city is on pace to surpass 300 homicides for the third year in a row. Before 2015, that mark hadn’t been reached in Baltimore since the 1990s.

City council members there in support of the bill were Leon F . Pinkett III, Isaac “Yitzy” Schleifer, and Robert Stokes Sr. Other council members voiced their opposition to the bill Friday, including Ryan Dorsey and Kristerfer Burnett.

Dorsey said the legislation should not be fast-tracked.

“This is not something that we should decide on overnight,” he said. “It’s going to disproportionately impact black people and communities negatively. I haven’t seen any evidence that mandatory minimums actually deter any sort of crime.”

Burnett said the city would be better off increasing funding for Safe Streets and schools to combat violence.

“We should treat violence as a public health issue,” he said.

He argued that mandatory minimums do not decrease crime.

“We are under a lot of pressure right now from community members living in neighborhoods experiencing violence to do something,” Burnett said. “I don’t want to minimize their fears, but we have a responsibility to enact good policy as well.”

Councilman Brandon Scott, chair of the public safety committee, said he believes there are good intentions behind the bill, but he also has some concerns that must be discussed as he and his colleagues consider the legislation.

“We have to figure out how to make sure that those violent repeat offenders who feel comfortable carrying guns are being punished, but at the same time we cannot have things that are going to make things worse when you’re talking about the grand scheme of young poor black people in our city.”

Baltimore State’s Attorney Marilyn J. Mosby, whose office often strikes plea deals with gun offenders in which the offenders receive sentences of less than a year in prison, was not at the press conference.

In response to questions about the bill and its potential impact on plea negotiations, her office released a statement that did not mention the bill. It said Mosby is “committed to holding criminals who wreak havoc in our city accountable for their actions and support all efforts intended to strengthen gun control.”

Not once, but twice we get an admission black people are responsible for virtually all the crime/gun crime in 70 percent black Baltimore.Mind you, Baltimore was 88 percent white in 1917.You'd think elected officials would want to get criminals off the streets to attract businesses into the city, because 70 percent black Baltimore is in desperate need to expand its tax base. You'd think they'd be delirious of attracting citizens to the city who could help save the crumbling housing stock, a byproduct of an neglectful black population uninterested in maintaining residential property white people long ago abandoned.But no, we get, "disproportionately impact black people," and mandatory one-year sentences for illegal gun possession will perpetuate the cycle of systemic racism because, "mandatory minimums have been specifically shown to overwhelmingly impact poor black people."

You can have western civilization or you can have a black population.It's one or the other.Baltimore in 2017, a 70 percent black city where elected black officials protect black criminals from being held accountable for their lawless actions, is a powerful reminder of this option.Civilization or Africa.Baltimore has a nonfatal shooting/homicide problem because of blacks, which is also why businesses hide their employees behind plexiglas (or is it plexiglass?) in the 70 percent black city.