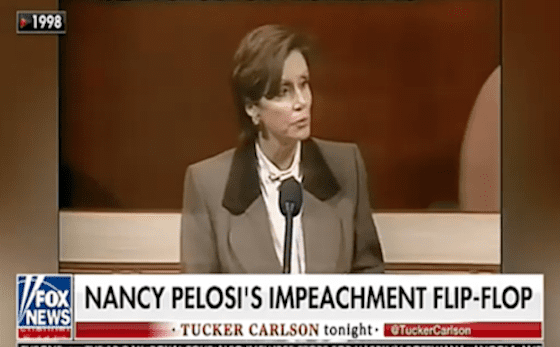 Politicians often act as if film and videotape of past events did not exist, so they routinely make statements that are polar opposites of what they have said previously. They rely on friendly news outlets not to embarrass them by broadcasting examples of their hypocrisy.

It’s unlikely, for example, that CNN and MSNBC are showing clips of Representatives Nancy Pelosi and Jerry Nadler expressing disgust with the impeachment process in 1998 when Democrat Bill Clinton was in the dock. 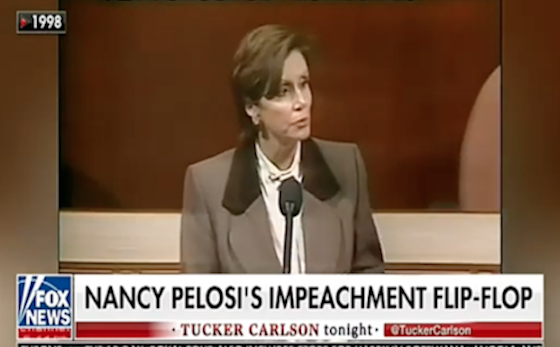 According to Pelosi, Republicans were consumed with “hate” because they voted to impeach President Clinton. Randy Bill got caught after he lied under oath about having sex with a young intern, Monica Lewinsky.

But now, Speaker Pelosi has announced an impeachment based on the sketchiest of evidence, and compared her action to those of the Founders’ “urgency of protecting and defending our constitution from all enemies, foreign and domestic, in the words of Ben Franklin, to keep our republic.”

TUCKER CARLSON: Well, Nancy Pelosi and Jerry Nadler are in charge of impeachment this week, but they had pretty different opinions on the subjects just not that long ago, a few decades ago. One Democrat currently in Congress is about to tell us why he disagrees with impeachment today.

But first, Trace Gallagher has to look back at Pelosi and Nadler’s view on this suddenly very relevant topic. Hey, Trace.

REPORTER TRACE GALLAGHER: Hey, Tucker, and what makes this so rich is that House Speaker Nancy Pelosi says that no one is above the law. Most legal analysts even on liberal media outlets acknowledge it would be very difficult to make a case that President Trump broke the law.

But back in 1998, President Clinton actually did violate the law and when House Republicans voted to impeach, Pelosi said it was based solely on hatred. Watch:

REP. NANCY PELOSI, D-CA: Today, the Republican majority is not judging the President with fairness, but impeaching him with a vengeance. In the investigation of the President, fundamental principles which Americans hold dear — privacy, fairness, checks and balances have been seriously violated.

GALLAGHER: Also, back in 1998, Pelosi went on to say that President Clinton was not impeached for one single thing, but for all of the GOP grievances against him.

REP. JERROLD NADLER, D-NY: An impeachment of a President is an undoing of a national election, and one of the reasons we all feel so angry about what they are doing is that they are ripping from us, they are ripping asunder our votes. They are telling us that our votes don’t count.

GALLAGHER: So for the record, in 1998, Nadler said impeachment was bad for the country. In 2019, he says it vindicates the Constitution — Tucker.

CARLSON: Amazing. That just made my night. Trace Gallagher, thank you for that.

Well, until just the other day, Democrats appeared to be divided on the question of impeaching the President. This week, they appear to be nearly unanimous. But a few you holdouts are warning that an impeachment push is a mistake, bad for the country and possibly counterproductive politically.