Here’s a long draft of an article by economist David Roodman on what the profession of economics teaches us about the quantitative impact of immigration on natives. I haven’t read the whole thing, but I did hit Ctrl-F for keywords such as land, housing, mortgage, standard of living, California, Los Angeles, and so forth.

Like most economists thinking about immigration, Roodman is more concerned with incomes than with the whole equation of standard of living. But being from Los Angeles, it’s hard for me not to notice the remarkable relative decline in standard of living in the immigration capital of America over my lifetime.

For example, from Bloomberg:

… Angelenos use a bigger slice of their paychecks on shelter than people in New York, San Francisco or Miami, studies show. 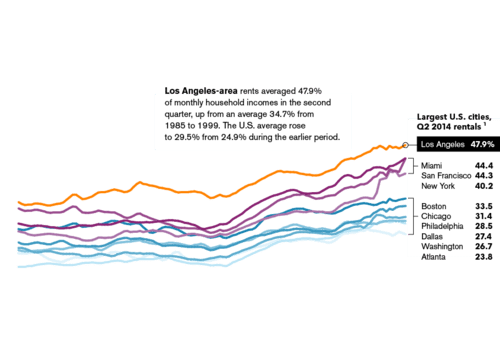 Horizontal axis is years beginning in 1984

Surging property prices in the second-largest U.S. city are driving up costs in once-impoverished areas while pushing lower-income households into converted garages or to distant suburbs, where the tradeoff is hours stuck in traffic each day.

“They’re bottom earners living in a high-priced housing market,” said Dowell Myers, a policy, planning and demographics professor at University of Southern California in Los Angeles. “The L.A. market’s messed up on so many fronts.”

About half of area households spend at least 30 percent of their income on housing, including costs such as utilities and property taxes, the highest proportion among 381 U.S. metropolitan areas, according to a report by Harvard University’s Joint Center for Housing Studies. Housing costs of 30 percent of income or less are “the traditional affordability standard” and those paying more are “cost burdened,” the study’s authors wrote.

The burden is heaviest for renters. According to Zillow Inc. (Z), Los Angeles rents average about 48 percent of the area’s median income. That’s more than any other city and up from about 35 percent in the 1980s and 1990s, the real estate data provider said in an Aug. 21 report.

Homebuyers in Los Angeles devote about 43 percent of their median income to shelter at current prices and mortgage rates, tied with San Francisco for first place, Seattle-based Zillow said. The Los Angeles region has the lowest homeownership rate – - the proportion of housing units occupied by the owner — of the 50 largest U.S. metro areas, U.S. Census data show.

While home prices and rents are higher in San Francisco and New York, Los Angeles is less affordable because incomes are lower — and lagging behind housing inflation.

The median household income in the Los Angeles metro area was $59,424 as of the second quarter, about 22 percent less than in San Francisco and 13 percent lower than in New York, according to a Zillow analysis of Census data and figures from the Bureau of Labor Statistics. …

In the 1970s, Los Angeles began turning into a market where most people rent their homes, and construction has failed to keep up with soaring demand, according to a July study co-written by Paul Ong, a professor of urban planning and social welfare at the University of California at Los Angeles.

… Some struggling Angelenos are opting to live in recreational vehicles or illegally converted garages. In June, a federal appeals court struck down a 31-year-old Los Angeles ordinance that sought to bar people from living in vehicles on the street after homeless residents sued the city.

The Department of Building and Safety has fielded more than 17,500 complaints of garages converted into illegal residences in the past decade. The number of unpermitted conversions driven by financial hardship has risen as housing costs climb, said Kim Darigan, founder of Property Forensic LLC, which advises homeowners who have received city citations for illegal structures.

“We’ve seen a lot more of this in the last few years,” Darigan, whose Van Nuys, California-based company advertises on the Web under IllegalConversionsLA.com, said in a telephone interview. “Many single-family residences, particularly in lower-income neighborhoods, do this to make extra money or to take in family members who can’t afford their own homes.”

The number of unpermitted housing units in Los Angeles may be as high as 70,000, according to City Councilman Paul Koretz.

A dearth of funding for subsidized housing, community resistance to new projects and a decentralized power structure – - the county is divided into 88 separate cities — contribute to the shortage of living options, particularly for renters, according to Ong, the UCLA professor.

“When you open it up like this, you just give people the chance to argue every stupid little point until you finally acquiesce and come up with some compromise that’s not even close to meeting the level of demand,” Thornberg said in a telephone interview.

From 2007 to 2011, almost 42,000 Angelenos moved to San Bernardino County in the region known as the Inland Empire, about 60 miles (97 kilometers) east of downtown Los Angeles, according to a Census Bureau report. It was the nation’s biggest net county-to-county movement in the period.

“People with modest means are being forced away from their jobs into the Inland Empire and therefore having to deal with enormous commutes,” John Husing, chief economist at the Inland Empire Economic Partnership, said in a telephone interview.

Obviously, some of this decline in living standards would have happened eventually without immigration. The weather in SoCal is a lot better than in Minnesota (it’s not just the mild winters, it’s the lack of summer humidity and mosquitoes). But how in the world is it not obvious to economists that mass immigration has exacerbated this trend?