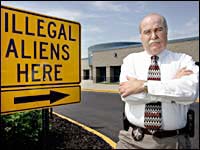 Here's a sniffler from National Public Radio, which is quick to note the discomfort of illegal aliens from the law enforcement efforts of the local sheriff in Butler County Ohio. Interestingly, the illegal immigration crackdown of Sheriff Jones has the desired effect. Latinos Rattled by Ohio Sheriff's Mission   [6/21/06]

"I've heard about what is happening with the new laws and, honestly, I'm scared because we don't have our papers," says Alejandra, a Hispanic woman pushing her toddler son down the street in a stroller.

She has just come from collecting clothes at a church and looks as if she can't get home fast enough. As she speaks, her eyes dart all around. Alejandra says she tries to stay off the streets as much as possible these days. Her husband has a job in a factory, but they're so worried that they, too, might be arrested by the sheriff that they just might give up on life in the United States.

"In two, three months, we might go back to Mexico and not come back again," Alejandra says. "I even have a brother-in-law, his company has told him he has one more month and then there will be no more work for him. So we're going to have to go."

Attrition, aka self-deportation has another advantage: there is no taxpayer money needed to ship the foreigners to their native countries since they buy their own tickets.