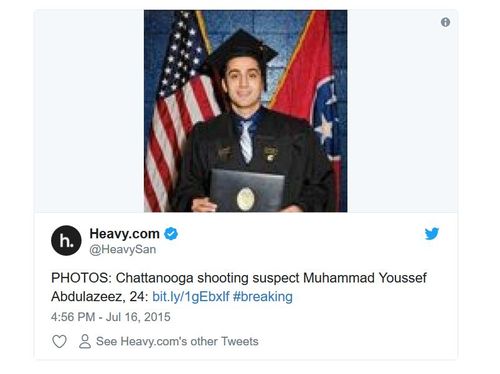 The first thing I wanted to know when I saw the Washington Post report of a gunman shooting US Marines in Tennessee was “What color gunman?” The story didn’t say, although it’s been updated with the gunman's name (Muhammad Youssef Abdulazeez from Kuwait)and I think that when MSM reporters are in press conferences, and the spokesman says “We can’t release the name of the gunman just yet”, the reporters should be shouting that question: what color gunman?

Because I promise you, people at home are shouting it at their TVs.

Anyhow, here he is in all his assimilated glory:

We call this "Immigrant Mass Murder"—someone moves to America and kills a bunch of people who didn't have to die, at least in America, if the hadn't been allowed to move here.

Jamaican-born Long Island Railroad gunman is a case that was mentioned in Alien Nation, and there are many other cases, generally not reported as such in the MSM, which tends to call the killer "Chicago Man" or whatever. In 2011, I published an article called VDARE.com’s Immigrant Mass Murder Syndrome Count—As Of July 28, 2011: 37 Cases, 337 Dead.