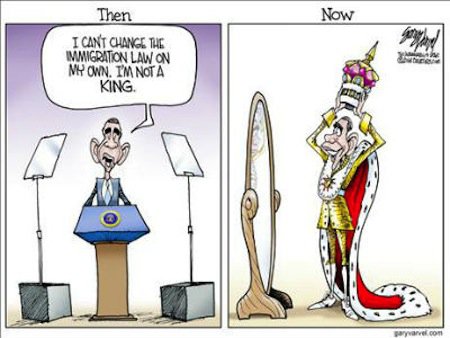 Who knew that even a tiny instance of immigration enforcement could occur in Obama’s America? Apparently Judge Andrew Hanen’s holding the feds accountable for the administration’s lawless mini-amnesty has been having an effect. The judge acted to halt the imperial amnesty in February, but the DHS continued to hand out work permits (The Real Amnesty) anyway.

It didn’t faze the administration that the USCIS had admitted known gangsters to the DACA amnesty and one had murdered a young woman. But the legal system still has some currency. This time.

DHS boss Jeh Johnson must really want to avoid facing the judge and having to explain his knowing violation of a court injunction.

Here’s an official Fact Sheet from USCIS on the subject:

WASHINGTON—If you are a DACA recipient who received a three-year Employment Authorization Document (EAD) after February 16, 2015, it was likely mistakenly issued and must be returned.

Approximately 2,100 DACA recipients were issued three-year Employment Authorization Documents, rather than two-year EADs, after the February 16, 2015, court injunction was in place. USCIS has taken action to correct this issue for these individuals and has updated their records to reflect a two-year period of deferred action and employment authorization. USCIS has re-issued and mailed the corrected two-year EADs to these individuals. USCIS has also notified these individuals that the three-year EADs are no longer valid and must be immediately returned, along with any related approval notices. USCIS is carefully tracking the number of returns of these invalid EADs and continues to take steps to collect the remaining cards. (Continues)

In fact, more was done than bureaucrats merely issuing a memo: agents will go door to door (!) to retrieve the unlawful amnesty documents. That’s the plan, at least. Let the raza shrieking begin!

Goosed into action by an angry federal judge, federal immigration authorities will go door-to-door demanding illegal immigrants return the three-year amnesty approvals the Obama administration issued to them in defiance of a court order.

Those who don’t return their three-year permits will have them terminated at the end of this month, the National Immigrant Justice Center, one of the advocacy groups briefed on authorities’ plan, said in a statement preparing immigrants for what could be a traumatic encounter.

The move comes as Homeland Security officials, fed up with slow-walking by illegal immigrants, are finally playing hardball after months of less forceful measures.

They’re scrambling to meet an end-of-month deadline set by Judge Andrew S. Hanen for recapturing thousands of three-year amnesties the department issued even after the court had entered an injunction halting the new amnesty program.

Unless all of the permits are recovered, Homeland Security Secretary Jeh Johnson could personally have to appear in court to explain the foul-up, Judge Hanen said in an order earlier this month.

But the home visits also come at a tricky time, when immigration is a heated issue, and any contact by authorities can be scary for immigrants. Advocacy groups, who were given a heads-up by U.S. Citizenship and Immigration Services, are preparing to field calls from frightened immigrants.

“The USCIS home visits unfortunately will add to the mounting confusion and anxiety communities feel as they await a resolution in the executive action case, but individuals should know it is critical to comply with requests to exchange their work permits, whether they receive a letter or visit at their homes,” Vanessa Esparza-Lopez, supervising attorney for the National Immigrant Justice Center’s legal defense project, said in a statement.

In a new fact sheet, USCIS raised the number of erroneous “Employment Authorization Documents,” or EADs, it approved from about 2,500 to 2,600 — the third time it’s boosted that estimate.

“USCIS is carefully tracking the number of returns of these invalid EADs and continues to take steps to collect the remaining cards,” the agency said.

The amnesty was supposed to be the crowning achievement in President Obama’s immigration policy. Instead, it’s been a big headache, exposing bureaucratic bungling and getting the president and his top aides ensnared in a complex court case that’s not gone his way.

Mr. Obama had been trying to expand his 2012 amnesty, which granted two-year tentative legal status and work permits to so-called Dreamers. Under his new plan, the amnesty would last for three years and would apply to millions of illegal immigrant parents.

The Dreamers were allowed to apply for three-year permits soon after the Nov. 20, 2014, announcement, while parents were to begin applying this May.

But Judge Hanen, in a case brought by Texas and 25 other states, ruled that Mr. Obama likely broke the law in forming his amnesty. The judge issued an injunction halting it on Feb. 16, and thought he’d nipped the entire program.

Several weeks later, however, administration lawyers admitted they’d been approving applications beginning in November, and that more than 100,000 Dreamers had been granted three-year status. Worse yet, the administration has twice come back to Judge Hanen and reported that thousands more approvals were sent even after the Feb. 16 injunction — a clear violation of the court order.

In a document filed late last week, the administration said it had recaptured fewer than 1,200 of the initial 2,100 wrongful amnesties. And, in a stunning admission, lawyers said they’d discovered another 500 amnesties they hadn’t known about before that also were sent after the Feb. 16 injunction.

“The government fully appreciates the urgency of the situation and is proceeding with expedited remediation,” the administration’s lawyers promised Judge Hanen.

The three-year permits have already been canceled in the government’s own computer systems, and have been changed to two-year authorizations, the lawyers said.

But Judge Hanen seemed miffed that the government has not yet collected all of the erroneous amnesties, saying he detected a “cavalier attitude” from the government about its bungle.

“The government has conceded that it has directly violated this court’s order in its May 7, 2015 advisory, yet, as of today, two months have passed since the advisory and it has not remediated its own violative behavior,” the judge wrote. “That is unacceptable and, as far as the Government’s attorneys are concerned, completely unprofessional.”

He set an Aug. 19 hearing, and said unless the government can fix things by July 31, each of the defendants named in the case — Mr. Johnson and his top lieutenants in the immigration agencies — would have to appear to explain themselves.