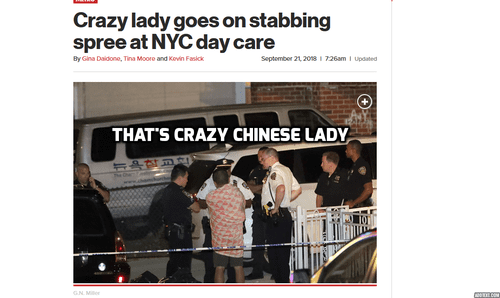 This is a story of an attempted Immigrant Mass Murder, targeting children and infants, as well as adults. As far as I can tell, everyone involved is Chinese, although the children were technically Americans, because the "Day Care" was part of a citizenship mill involving birth tourism:

An unhinged woman went on a stabbing spree inside an illegal Queens daycare early Friday, slashing three newborns — including one as young as 3 days old — and two adults before slitting her own wrist, police and sources said.

The bloodbath unfolded just before 4 a.m. at a multi-family home on 161st Street near 45th Avenue in Flushing, where the daycare was being operated under the name Mei Xin Care Inc., cops said.

The woman — identified by law enforcement sources as Yu Fen Wang, 52 — used a knife to stab the babies, as well as a man who was struck in the leg, NYPD Assistant Chief Juanita Holmes said at a press conference.

The newborns are 3 days, 2 weeks and 1 month old, sources said, and officials confirmed the man is the father of one of them.

Wang, who works at the daycare, also attacked a co-worker in the torso before slashing her left wrist.

Two knives — including a meat cleaver — were recovered at the scene.

All of the victims, including Wang, are in stable condition at New York-Presbyterian Queens Hospital, police added.

The babies and adults lived in the brick-front home, which a high-ranking source said doubled as a citizenship mill.

“The daycare was illegal. They used it as a place for Chinese women to keep babies they gave birth to,” the source explained. “The moms would then get citizenship because babies were born here.”

In total, seven babies were inside the home at the time of the attack, according to police.

Sources said multiple cribs were found on the first floor of the home.

Police are trying to determine whether the mothers gave birth at the home, the source added.

Mei Xin Care is a registered business with the Department of State — but it’s unclear whether it’s licensed as a daycare through the city Department of Health.

There's some good reporting there about the Chinatown/Anchor Baby aspects of this story, but you can see that the editors never allow it to reach the headline.