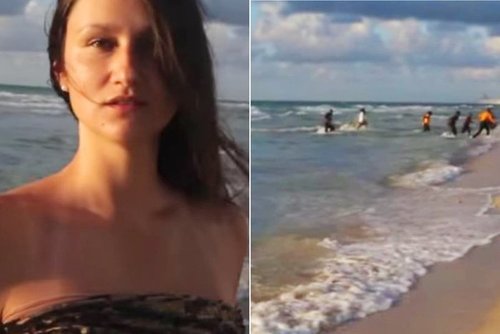 Via Powerline Blog, and thanks to Paul Nachman for the tip, comes this video of illegal aliens, who could be from Cuba, or could be from anywhere in South or Central America, storming Miami Beach. From the Broward New Times:

About 6 a.m. on July 10, Ekaterina Juskowski was shooting a video of her friend, a model, near 36th Street in the heart of Miami Beach.

She noticed that a blue-green boat in the background — she thought it was a scuba boat — was coming closer to shore and thought, “They are ruining my video.”

Juskowski shut off the camera for a moment but turned it back on when all of the men on the boat — about nine of them — jumped off and dashed across the sand and into the city, leaving the boat bobbing, empty, by the beach. Juskowski’s video illuminated how brazenly migrants are entering the country along the Florida coastline. [Migrants Jump Off Boat, Run shore, During Miami Beach Fashion Shoot (VIDEO), By Deirdra Funcheon, July 27, 2015]

More from the Broward New Times:

U.S. Border Patrol spokesperson Frank Miller said, "That's a testament to how confident these organizations are — what we call transnational criminal organizations — who smuggle criminals and narcotics right onto the beach." He said the incident was under investigation and noted, “There has been an increase in known maritime smuggling in Florida — from Key West all along the Florida coast — from fiscal year 2014 to now."

The Border Patrol's website says there were 2,034 "Illegal Alien Apprehensions" by the Miami office in 2014 and 3,942 apprehensions via "coastal border" nationwide that year. (3,338 apprehensions were for immigrants coming in through the nation's northern border with Canada, and a whopping 479,371 migrants were apprehended coming through the southwest border with Mexico.)

The New Times story is illustrated with the mandatory picture of the Statue Of Liberty that goes on all immigration book and stories. (She's even on Alien Nation.) The cut line under the photo is "'Give me your tired, your poor, your huddled masses yearning to breathe free'?"