Illegal Mexican Released from Prosecution in Death of American Student 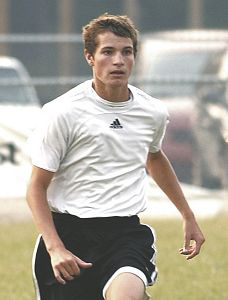 Here is another tragic story about drunk-driving illegal aliens killing a young American, in this case Josh George (pictured) of Bluffton, South Carolina.

The 17-year-old high school student was struck apparently by a carload of of illegal aliens as he was driving home from the prom and died three days later in a Savannah hospital.

The identity of the driver remains unclear. The police arrested an illegal Mexican, Juan Roman, aka Juan Olague Rodriquez, but the DNA evidence on the beer cans in the vehicle didn't match up. So the guy is going to be deported rather than prosecuted. He lived in a house with several others who have since left town.

Investigators believe three men were inside the Subaru that night. The trio had been drinking at Palomas, a predominately Hispanic bar off S.C. 46.

All of the people living in the Vista View home left within two days of the fatal wreck, leaving police with two unknown DNA profiles and no witnesses.

Their employer, a local painting company, began checking their immigration status the following Monday. The landlord told police the group had moved out quickly and he had no idea where they went.

"We've spent the better part of two-and-a-half months trying to locate them to no avail," McAllister said.

Authorities aren't even sure if the names they provided are real.

The DNA profiles gathered from the beer cans inside the car will be loaded into a national database, in case the two other men in the car are ever involved in a crime.
[Solicitor drops charges against man first suspected in crash that killed Josh George, Island Packet, July 16, 2009]

Hopefully the real killer will be caught at some point through the DNA evidence. But that won't change the loss of a young man with his whole life ahead of him in a totally preventable crime.

The fatal wreck stunned the community because it claimed the life of what Josh George's high school principal called a "top-shelf kid." George was a gifted student and captain of the varsity soccer team.

His family had known tragedy before.

George's father died in 2001 when the F-16 he was piloting crashed near Edwards Air Force Base in California. Father and son are buried next to one another in Huntington, W.Va.