Before the big Senate amnesty tanked due to unprecedented public outcry, illegal Irish were full of warm multicultural support for their compadres in sombreros. Now, not so much. In the previous situation, the Irish were happy to lobby for an amnesty for the tens of millions of lawbreakers in order to convenience themselves while incidentally trashing America. But that political solidarity with Mexicans et al has disappeared in the new non-amnesty climate.

Illegal Irish believe they are SPECIAL, and they now insist that they receive a separate amnesty on their own. So sorry, Mexicans! It's every border-buster for himself these days! 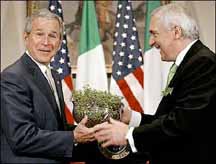 President Bush is committed to dealing with the issue of illegal Irish immigrants in America, the US consul for Northern Ireland has said.

The failure of recent legislation which would have allowed illegal immigrants who had left the US to return means many are afraid to visit home.

Hey, does Mexico City know about Bush accepting a legally binding bowl of shamrocks (photo above) from Ireland PM Bertie Ahern? Where's the diplomatic outrage on the part of el Presidente Calderon? He should respond with a sprig of Mexico's similarly iconic plant.

On second thought, maybe not.