Illegal Irish Out Themselves 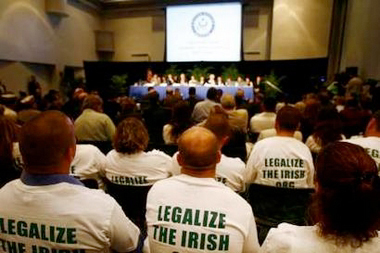 This photo of the audience at the July 10 Senate hearing in Miami was an impetus for me to revisit the Irish contingent of the complaining aliens brigade.

The Irish Lobby for Immigration Reform is the source of the many Legalize-the-Irish t-shirts showing up at various venues. Senator Spector seemed happy to receive one.

Irish Voices continues to be a tiresome blog of whining and bogus entitlement. One recent post refers to House defenders of US sovereignty as "Know-Nothings." Another called the House hearing in Texas a "cynical sideshow." That was the hearing where border sheriffs described the escalating border chaos, like the recent torture-murder of an officer:

SHERIFF SIGIFREDO GONZALES, ZAPATA COUNTY, TEXAS: Last Saturday, a detention officer of the Starr County Sheriff's Office, 100 miles southeast of here, went to Mexico to visit his girlfriend. He was reported missing the next day on July 2nd. On July 3rd, his body was found close to Monterrey, Mexico, had been brutally tortured, had been brutally beaten, hands were tied behind his back. His eyes were bandaged. He had been shot in the back of his head, the bullet exiting in the forehead.

WIAN: Gonzales testified that at the officer's funeral two days ago one of the mourners was kidnapped allegedly by a Mexican illegal alien already suspected in another U.S. murder case. [Lou Dobbs Tonight transcript, 7/7/06]

Apparently illegal Irish don't care that the majority of Americans across the political spectrum want immigration to be legal, controlled and reduced, starting with the House approach of enforcement first. Otherwise, the Irish wouldn't be insulting a core belief of the people whose country they say they wish to join.

As we know, the Senate bill is a blueprint for treason, to end the American nation-state and institute a North American flophouse based on globalist economics and the model of the failed European Union. But the illegal Irish think it is a fine document because it gives them their desired amnesty — at the expense of the American people.