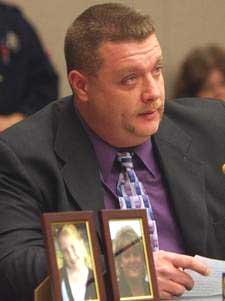 On June 8, Lori Donohue and her 8-year-old daughter Kayla were hit and killed by a drunk-driving illegal alien as they left the girl's dance class (see my VDARE.com blog New York State Mother and Daughter Struck Down by Illegal Alien).

The killer was sentenced recently to the maximum allowable, after victim statements by Lori's husband Robert (pictured here) and her father, John Luhrs. However, 8 1/3 to 25 years in prison does not seem like an adequate punishment for causing the deaths of two people.

The Guatemalan killer, Conses Garcia Zacarias, was so drunk that he couldn't recall the crash at all. Or so he says. He "expressed remorse" during the sentencing, at the same time as he compared his family's suffering with the Donohues'.

An illegal immigrant who was driving with no license and a blood-alcohol level nearly twice the legal limit when he plowed into and killed a Southeast mother and daughter received the maximum sentence Wednesday of 8 1/3 to 25 years in state prison.

Conses Garcia-Zacarias, 35, who has been held in the Putnam County jail since the June 8 fatalities, pleaded guilty in November to two counts of vehicular homicide in the deaths of Lori Donohue, 37, and her 8-year-old daughter, Kayla. The second-grader and her mother were leaving the girl's dance class at Seven Stars School of Performing Arts in Brewster when Garcia-Zacarias struck them with a pickup truck.

The act instantly took away half of the Donohue family, leaving Robert Donohue and his 5-year-old son, Christopher, grieving for the wife and mother, sister and daughter they lost.

"Explaining to my 5-year-old son that he can never hug or kiss his mother and sister was the most difficult thing I've ever done," Donohue told the court Thursday.

Donohue was accompanied in Putnam County Court by more than two dozen friends and family members who took up four of the six rows in the courtroom.

Lori Donohue's father, John Luhrs, 70, of Bethel, Conn., also gave a victim-impact statement. He placed photos of his daughter and granddaughter on the prosecutor's table before looking up at Putnam County Judge James Rooney and saying, "Your Honor: A parent's worst nightmare."

You can watch the victim's statements of Lori's father and her husband Robert in the video below.