The Donohue family of Brewster, New York, was brutally cut in half June 8 when the daughter, Kayla, and her mom, Lori, were run down in the parking lot of the little girl's dance academy by a drunk-driving illegal alien: [Local Family Destroyed By Alleged DWI Crash, WCBS-TV, June 10, 2009].

A mother and daughter were killed instantly on Monday evening after they were hit by a suspected drunk driver. It happened in Brewster and on Tuesday friends of the family held a candlelight vigil. [...]

On Tuesday grief counselors met with the young dancers, some of whom witnessed the devastating site as the young girl became pinned against the wall. Her mother was below the truck.

Behind the wheel was 35-year-old Zacaria Conses Garcia. It was 6:45 p.m. Monday when his Ford pickup truck barreled through a Brewster intersection and into the dance academy parking lot.

Garcia was driving without a license, in the country illegally.

Eight-year-old Kayla had been practicing for a dance recital later in June. Putnam County Chief Assistant District Attorney Christopher York remarked, "The only thing I can think was that this little girl was dancing a few hours ago."

The drunk driver, Zacaria Conses-Garcia, worked for a local horse trainer, Valerie Ann Renihan, who actually owns the Ford 350 pickup which killed Lori and Kayla Donohue. Renihan claimed ignorance about the truck, but neighbors of the accused said the truck was routinely parked at his residence overnight.

Conses-Garcia had a blood alcohol level of .15, which is nearly twice the New York threshhold for intoxication (.08). He is a citizen of Guatemala and has been charged with first-degree vehicular manslaughter, a felony, and driving while intoxicated. He remains in Putnam County jail with a $150,000 bail.

Below, the Donahue family at an earlier time, before the mother and daughter were killed by a drunk-driving illegal alien. 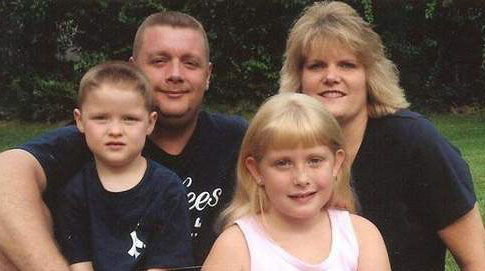