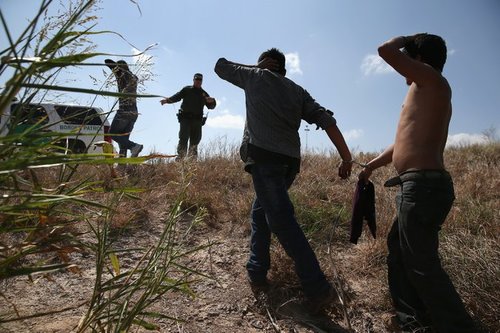 Official Washington and the chattering class are busy focusing on Obama’s pointed welcoming of unscreenable Syrian aliens — aka “refugees” — to the United States, and anyone who doesn’t like it is mean and “unAmerican” according to the resident of the White House. In fact, Obasma rubbed Thanksgiving salt in the wound by calling the unwelcome Muslims the modern equivalent of America’s pilgrim forebears.

His patriotism is rather selective as the clock runs down to January 17, 2017.

Meanwhile, the floodgates are fully open on the Mexican border and the Centrals are back in force, though with far less attention than the Syrians are receiving. The number of “unaccompanied children” has doubled, but many of them are likely teens not toddlers. Even middle-aged men have posed as minors to get American free stuff.

Why isn’t the open border recognized by DC suits as a major terror threat? It’s not news that jihadists use Mexican cartels’ well established smuggling infrastructure to enter America. The Washington Times reported in 2009: Hezbollah uses Mexican drug routes into U.S. to smuggle dope and people. So the number of sleeper jihadists residing in this country could be higher than anyone wants to think.

Plus, as the article notes at the end, if word reaches the Middle East about the ease of illegally entering the US then many will just join the Centrals on the train north.

MISSION, Tex. — The numbers of migrants crossing the Rio Grande illegally have risen sharply in recent weeks, replaying scenes from the influx of Central American children and families in South Texas last year.

Once again, smugglers are bringing hundreds of women and children each day to the Mexican banks of the river and sending them across in rafts. In a season when illegal crossings normally go down, “The numbers have started going the other way,” said Raul L. Ortiz, acting chief of the Border Patrol for the Rio Grande Valley. Since Oct. 1, official figures show, Border Patrol apprehensions of migrant families in this region have increased 150 percent over the same period last year, while the number of unaccompanied children caught by agents has more than doubled.

The new flows here are smaller than the surge in the summer of 2014, but come after a year of declines in illegal crossings across the southwest border. The increases come as Americans’ concerns about border security are heightened after the Nov. 13 attacks in Paris raised fears that terrorists would try to sneak into the United States. And they are complicating the Obama administration’s efforts to reassure the country that the border is under control.

Border officials said that they were monitoring the growing stream, but that they had not signaled a higher security risk or activated any special response.

A mix of factors seems to be driving the new flow. Many of the migrants are women and children fleeing vicious gangs and endemic sexual violence in Central America who are hoping for asylum in the United States. Rather than hiding from Border Patrol agents they often try to find them, to ask for protection and start the long legal battle to remain here.

In October, the United Nations High Commissioner for refugees, António Guterres, said uncontrolled violence by the gangs had become “pervasive” in El Salvador, Guatemala and Honduras. He issued an “early warning” of “a looming refugee crisis.”

A report by his agency found that women in particular “face a startling degree of violence that has a devastating impact on their daily lives.” According to United Nations figures, this year El Salvador moved into first place in the world for the rate of murders of women and Guatemala ranked third, while Honduras had the highest murder rate over all.

Border officials argue that reductions in detention of migrant women with children could also have had an impact. Responding to federal court decisions, the Department of Homeland Security ended a policy of detaining most of the women to convey a dissuasive message to Central America. The authorities have been releasing women and children in three weeks or less, sending them to pursue claims for asylum in immigration courts around the country.

“I’m sure some information has filtered down to those countries that maybe they have some opportunities with respect to our inability to detain families and kids,” Chief Ortiz said in an interview at his headquarters near here. “Family members that are already here are saying, now is potentially a pretty good time to come to the U.S.”

In addition, there are signs that enforcement by the Mexican authorities along their border with Guatemala, which was stepped up aggressively in the summer of 2014 with assistance from the United States, is becoming less effective.

“The smuggling organizations are starting to figure out where their checkpoints are, how they’re deploying their officers, so they’re making some adjustments to get around them,” Chief Ortiz said.

There have also been smaller increases in migrants caught as they were trying to get away. On Saturday, agents at a checkpoint north of here in Falfurrias, Tex., found 11 migrants stashed in a load of vegetables in a refrigerator truck. Last week, Border Patrol agents apprehended five Pakistanis and one Afghan, along with two smugglers, near Sonoita, Ariz. Background checks showed those men had no history of suspicious activity, border officials said.

Until recently, illegal crossings in this Border Patrol sector, the nation’s busiest, had dropped sharply. About 147,000 migrants were caught in the year ending Sept. 30, a decline of 43 percent from the 265,000 caught the previous year. The numbers went down across the southwest border, mainly because of the lowest crossings by Mexicans since the 1970s.

But the flow in South Texas of migrants from Central America spiked in July and just kept rising. Across the border, apprehensions of migrants in families — mostly women and their children — soared in October to 6,029, an increase of 179 percent over October 2014.

Border Patrol agents, scouting dirt roads along the Rio Grande that are sinking in mud after fall rains, are recalling the surge of 2014. Smuggler guides, as they did then, bring migrants down to places where the dark river runs slowly and push them across on rafts.

“They crossed a group right there in front of me,” said one agent on the riverbank, pointing to a high point where he had been standing watch on a recent day. The smugglers were not deterred by his green uniform and badge, he said.

The migrants “jump out of the coyote’s truck and head down to the water,” the agent said, using the Mexican term for a smuggler. “They’re moving, and boom, they’re in.” They scramble up through the thorny brush on the American side. “They come straight to you,” said the agent, who was not authorized to speak by name.

Women and children who turn themselves in to the Border Patrol and ask for asylum pass preliminary security checks and are turned over, generally within two days, to Immigration and Customs Enforcement. Most are sent to two detention centers in South Texas, where they pass further checks and interviews to determine if they have credible claims to request asylum.

Border officials said they had seen no increase in Syrians at the border. But some lawmakers are concerned that if the flow from Central America continues to rise, migrants from Syria and Iraq could be attracted to join it.

“If people start seeing they can come to the United States this way,” said Representative Henry Cuellar, a Democrat whose district includes a stretch of the Texas border, “the word will get back that you don’t have to wait two years in a refugee camp.”