If You're Stuck In Traffic In Beaverton, Oregon, This Billboard Will Tell You Why! 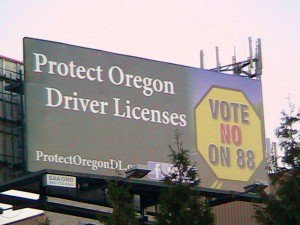 The photo above was provided by Cynthia Kendoll, president of Oregonians for Immigration Reform [OFIR]. About 100,000 cars per day pass the billboard, which sits on the south side of highway US 26, about 1/2 mile west of NW Cornell Road in Beaverton (see map below). 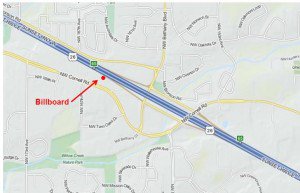 Cynthia tells me that Highway 26's heavy traffic means it's often slow going along this stretch, so many Oregon motorists will get a leisurely view of the 12-foot by 28-foot billboard—lit from dusk until dawn—with its starkly simple message: Vote against giving "driver cards" to illegal aliens residing in Oregon.

In Oregon, all voting is by mail—a travesty, in my view—and the ballots will be mailed out to voters starting on October 15. So OFIR's prominent billboard has appeared in the nick of time.

A recent op-ed in the Eugene Register-Guard by Richard LaMountain, former vice-president or OFIR, splendidly illuminates what's at stake for Oregon and the whole country in the vote on measure 88. Here's an excerpt from the middle of LaMountain's piece:

"A stable, harmonious society depends on the law’s consistent application to both citizens and non-citizens,” writes Cynthia Kendoll, president of Oregonians for Immigration Reform. “A government that enforces laws on its citizens, but bends laws to accommodate those here illegally, will invite the contempt of both.”

Oregon does not exist in a vacuum. It has responsibilities to the nation of which it is a part. One of those responsibilities is to not take actions that reward lawbreakers and would, as [the Federation for American Immigration Reform] says, “frustrate .... the purposes and objectives of federal immigration law.”

This Oregon citizens'-veto referendum is the only plebiscite related to illegal immigration across the country this fall. (It's called a "citizens'-veto" because a win by those voting "No" would vacate a law that their legislature whooped through in the spring of 2013 and whose implementation was suspended because citizens collected signatures from enough voters to force the referendum.)

Kendoll tells me that a legion of dedicated OFIR activists have been working all out for a victory, and the polls encourage them that there's reason for optimism. Still, they're playing the role of David against a Goliath consisting of the usual suspects.

If you'd like to learn more about the No-on-Measure-88 campaign, you'll find voluminous information on the measure and on the campaign at a dedicated website OFIR has established: Protect Oregon Driver Licenses.