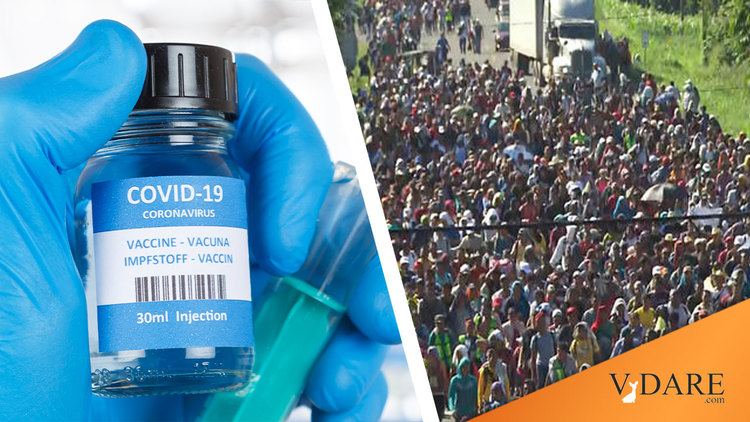 If El Paso Illegals Won't Take The Vaccine, Can We Send Them Back?

Illegal aliens held in a detention center near El Paso are refusing to take the vaccine.

Only about 33 percent of them have received it, and El Paso Matters is saying this is the result of "distrust" and "misinformation" [Efforts to vaccinate ICE detainees hindered by distrust, misinformation, by René Kladzyk, El Paso Matters,  July 13, 2021]

Despite an increased effort to vaccinate migrants held in Immigration and Customs Enforcement facilities, a large number of people in El Paso-area ICE detention have refused the vaccine, according to local officials and legal advocates.

El Paso County Judge Ricardo Samaniego [who has been leading efforts to get Americans in the county vaccinated] said that among those offered the vaccine at local ICE detention facilities, only about 33% accepted.

Immigrant rights advocates said issues with the vaccination efforts are linked to an array of structural problems with the federal agency, including: a pattern of medical neglect that fuels distrust among migrants, language access issues that spur confusion and lead to misinformation, and a lack of a systematic nationwide protocol for vaccinating people in ICE detention. ICE officials in El Paso did not respond to a request for specific vaccine refusal rate data.

“As much as we’d like to do it, we cannot force them to do it,” Samaniego said. “In the facilities they feel a little uncomfortable and they’re not trusting … because they’re captured, they’re captive at that point.”

Samaniego, a Mexican-American, may have some sympathy for the captives, but I don't.

Of course, if people in Florida refuse the vaccine, they're considered ignorant rednecks, but the concept of "ignorant wetbacks" doesn't exist in the media.  It should, though. Many Mexican illegals only have fourth-grade educations, and many do not, as I've pointed out repeatedly, understand the germ theory of disease.

This applies to Central Americans too, and even more to the Africans who use the Mexican Border to sneak into the US.

But their countries have strong public health laws, with compulsory vaccination for things like measles, as The Week noted during a 2015 measles outbreak:

Mexico and Central America have pretty robust vaccination programs. In his radio interview, Rep. [Mo] Brooks concern-trolls the "illegal aliens," kindly noting that they "have not been blessed with the kind of health care, the kind of immunizations that we demand of our children in the United States."

No, illegal immigrants probably aren't responsible for the measles outbreak, by Peter Weber, The Week, February 4, 2015

Anti-American point taken—these are not particularly free countries, and they don’t believe in letting their peasants go unvaccinated.

But this raises the question: if these illegals won't take the vaccine, can we send them back to a country where they will be vaccinated?