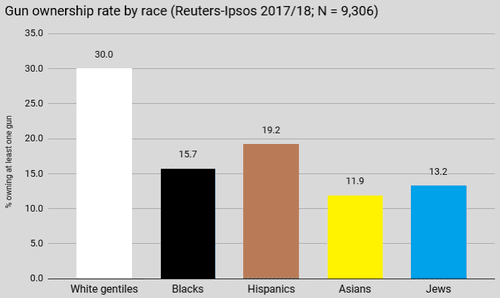 The correlation between gun ownership rates at the state level and Romney's share of the presidential vote in 2012 was a robust .78.

Though exit polling never inquires about gun ownership, it represents one of the widest electoral margins of all, not just at the state level but also at the level of individual voters. About the only thing wider is the Democrat margin among non-whites. The gun chasm is even larger among whites, with Trump winning 76%-24% among white gun owners.

Gun ownership isn't merely a proxy for whiteness. Most whites don't own guns. What it is more precisely is a strong proxy for badwhiteness. [‘I will not back down’: Kansas Republican defends displaying replica machine gun in parade,by Allyson Chiu, Washington Post, June 4, 2018]The quips about what happens if the Cold Civil War among whites turns hot are too easy.

Ashkenazi Jews are the ultimate goodwhites. Their gun ownership rate reflects that: 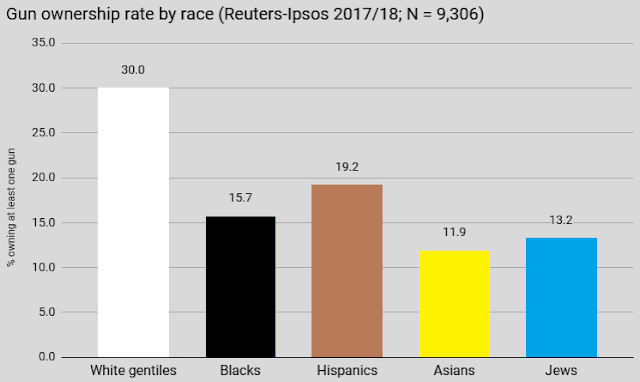 How convenient it would be for the gun grabbers if the black and white ownership rates were reversed. That blacks are only half as likely to own guns as whites are but are ten times as likely to murder people with them is... narratively problematic. It's the cause of each side perpetually talking past the other. As is the case with so many other things, anti-scientific race denialism makes us stupid.