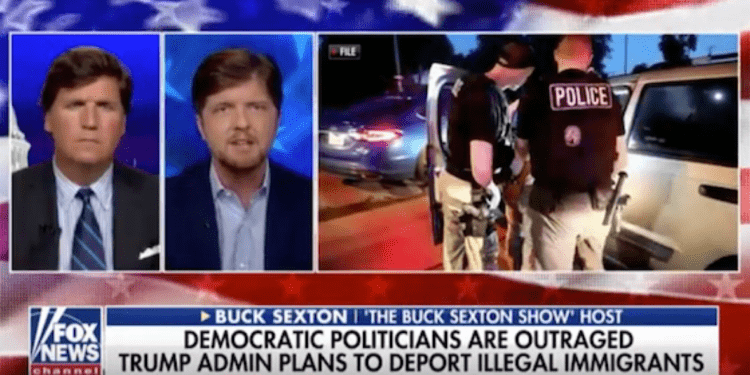 The plan of the feds to deport thousands of illegal aliens has illustrated the deep lawlessness of the Democrat party. Public officials from mayors to senators have lined up to support foreign fugitives against orderly law enforcement. Hillary Clinton, the 2016 Democrat candidate for president, tweeted out instructions in Spanish about how to avoid apprehension by immigration agents.

More than that, the Democrat shriek-out over a lawful action to remove aliens has demonstrated how little Dems care about Americans’ safety and quality of life. The presence of many millions of illegal aliens has brought more crime, decreased quality of education and lowered wages for citizen workers.

The truth is, Democrats have now outed themselves as preferring foreigners over American citizens. Hopefully voters will remember in 2020.

On Friday, Tucker Carlson considered the Democrats’ pro-lawbreaker reactions along with Buck Sexton, who helpfully enumerated the various crimes being committed by the illegal aliens and their friends in the Democrat party. 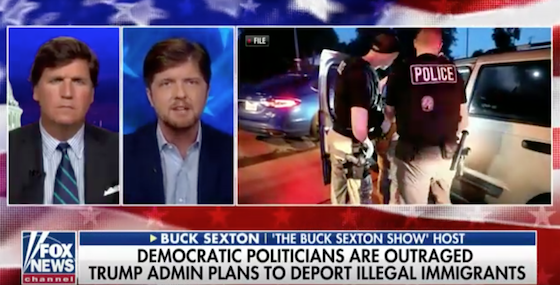 Too bad none of the treasonous pols will ever be held to account in any serious way.

TUCKER CARLSON: After several weeks of delay, this weekend, starting tomorrow, the Trump administration is planning to do something that it ran on back in 2016, enforcing the immigration laws of this country.

ICE is expected to launch raids in several American sanctuary cities. It’ll be seeking people who’ve received final orders of removal from this country, from a court.

According to the President, most of these people have already been convicted of other more serious crimes.

PRESIDENT DONALD TRUMP: It’s not something I like doing, but people have come into our country illegally. We’re focused on criminals. We are focused on — if you look at MS-13. But when people come into our country, we take those people out and we take them out very legally. They all have papers, and it’s a process and I have an obligation to do it.

CARLSON: Now, the Democratic Party has been committed to keeping the borders open for — well, really all of Donald Trump’s presidency so far — but they usually hide their intentions at least a little bit. They’ll say that people deserve their day in court first or they will argue that only criminals ought to be deported.

But this case is unambiguous. Every person being targeted by ICE starting this weekend has already received a final order for removal. In other words, they’ve had their day in court. They’re not being held in ICE facilities at the border. Many of them have criminal convictions.

At this point, it’s a simple matter of enforcing America’s laws. Bill Clinton did it. Barack Obama did it. But that was before. So these Democrats have made their decision. American laws do not matter. Nobody should be deported, ever.

BETO O’ROURKE: These massive raids and internal enforcement operations, they are going to separate potentially thousands of families, many of whom have committed no crime against this country, pose no threat to the United States of America.

REP. OCASIO-CORTEZ: I’d hope that we can come together as a party and stand up against what should be seen, I think universally as a cruel regime.

SEN. RICHARD BLUMENTHAL: Innocent people who may be swept up and arrested in massive raids across the country.

SEN. CORY BOOKER: We could be using these law enforcement resources to really go after the folks that are a real threat to our communities. This is all kinds of wrong, and we’re better country than this.

SPEAKER NANCY PELOSI: Families belong together. Every person in America has rights.

SEN. KAMALA HARRIS: And so he is going to create, as he often does, this distraction. I agree with you — and do these raids, which is — it is a crime against humanity.

CARLSON: Telling people who’ve been told by a court, by a judge, they must legally leave the country, enforcing that is a crime against humanity, says Kamala Harris.

Hillary Clinton meanwhile, piped up from retirement or whatever she’s doing these days. The same woman who claims that Russian Facebook trolls are a threat to democracy, decided to actively assist smuggling people into this country.

She posted a guide to evading ICE on Twitter, and added “Por pavor comparte,” that’s “Please share” in Spanish.

In the State of California meanwhile, Governor Gavin Newsom has released an instructional video informing his States’ criminals on how they can avoid law enforcement. Watch.

CARLSON: So picture a Republican Governor making a video used with taxpayer money telling voters how to — I don’t know — cheat on their taxes or how to buy illegal guns. What would the reaction be? Well, CNN of course, will call for them to be imprisoned. But it wouldn’t, because they care about the law, obviously, Republicans do.

On the left, a new reality is now explicit. Our laws and our Constitution are only valid if they’re in accord with current Democratic Party talking points. Otherwise, you can ignore them.

Buck Sexton is the host of “The Buck Sexton Show” and he joins us tonight. So Buck, you know, you hate to be continuously outraged over the same story. But every week, it seems to get crazier and crazier. And now we have lawmakers calling enforcement of the law a crime against humanity. Where does this end?

BUCK SEXTON: There’s a momentum to the insanity at this point, Tucker.

It’s quite clear that they are engaged in mass nullification of immigration law, that that is what is happening now. At any stage of the process, whether it’s in sanctuary cities, we’re talking about enforcement for people with final deportation orders. And this is all part of the con.

Initially, there were no caravans, and there was not going to be any problem, no crisis to the border. And then it was okay, there’s a lot of people at the border, but we just have to let people go through their process. And if they don’t get to stay after that, we promise we’ll be okay with them being sent home. And now we know that that was a lie all along, too.

They keep telling lies about this. And they’re honestly running out of room at this point. And that’s what — we’re facing nullification. And by the way, when you put up those lists, they’re getting very close to violating another statute over immigration — I’m sure they wouldn’t care – – which is aiding and abetting.

CARLSON: It’s crazy. But it’s also unfair on one level, I mean, so they’re telling foreign nationals they don’t have to abide by American law. They can ignore our laws, but they’re telling me that I have to follow every American law. And if I step outside the bounds of those laws, I go to jail. It’s like, why am I paying my taxes? Sincerely? Why can’t I buy a silencer? Why am I paying attention to all these laws, when they’re telling residents of Guatemala and Honduras like they don’t have to follow the law? I’m not kidding.

There is an entire subset of U.S. Federal Law that is being violated all the time with impunity, and people seem to think on the Democratic side they can just ignore all of this.

CARLSON: At some point, somebody is going to make a defense in court along those lines. Like these people don’t have to follow the law. Why should I? That’s when things really will start to fall apart.

SEXTON: I wish the Democrats would just be honest about what they want. If no one should get deported, if nobody should have immigration law enforced against them, the people like AOC, the legislative body in charge of these laws, they should just say, “We want to be open borders.” Stop pretending that’s not what they want. It is so clearly is.