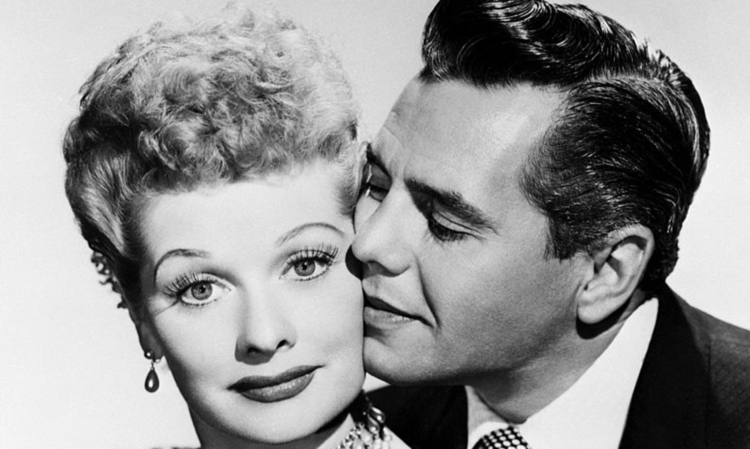 We've been having some fun positing historical trivia related to the increasingly popular interpretation of American history put forward by whiteness experts like Noel Ignatiev, that the Irish, Spaniards, Jews, Italians, and so forth weren't considered white until recently.

Or, for example, look how the CIA wouldn't allow James Jesus Angleton to join because his mother was Mexican.

Look how Mel Ferrer's acting career was so hampered by discrimination that he had to console himself with being married to Audrey Hepburn.

Look how Jose Ferrer's acting career was so hamstrung by bias against Puerto Ricans that he had to console himself with his Oscar and Tony and with marrying George Clooney's aunt twice, Uta Hagen, and Phyllis Hill.

Look how Danny and Marlo Thomas couldn't get on TV because they're Arabs.

Look how Harvard wouldn't employ George Santayana because he was a Spaniard.

I began with Desi Arnaz's colossal success in "I Love Lucy."

"And the success of Desi Arnaz doesn't really say much. Louis Armstrong was also popular in the past, but that didn't mean anti-black sentiments and anti-black laws didn't exist."

Yes, but Louis Armstrong didn't star in "I Love Marilyn," in which he played an Afro-American bandleader married to ditzy blonde Marilyn Monroe, who was Armstrong's wife in real life in 1951, in what would almost instantly become the most popular TV show of the 1950s.

Just to be clear: "I Love Marilyn" didn't happen.* And it wouldn't have happened in 1951, no way, no how. Marilyn married Joe DiMaggio and Arthur Miller. Rita Hayworth married the Aga Khan. But marrying, say, Louis Armstrong was a no-go in the 1950s.

The bottom line is that discrimination against blacks in American history was radically harsher than against anybody else, with the exception of American Indians (and the discrimination there was quite different, so it's hard to make an apples to apples comparison between blacks and Indians).

Everybody else wants to claim the glamor of victimhood (heck, Henry Adams, grandson of one President and great-grandson of another, felt discriminated against for not being elected President). These days, everybody wants to associate the historical slights against their group with the glamor of black victimhood, but this rhetorical trick is extremely unfair to blacks.
————————-

* I realize that there are a huge number of people who simply don't know enough facts to tell when I'm joking or not, and thus would get confused and disturbed when I switch back and forth between factual and facetious without warning. Fortunately, most of them don't bother trying to read me.

To recount: James Jesus Angleton's mother was Mexican and he was the head of counter-intelligence at the CIA for decades. When Robert De Niro directed a fictionalized biopic of Angleton's life, with Matt Damon as the Angleton character, the whole half-Mexican part was dropped, presumably as being too confusing to modern prejudices, and Damon played the lead as the most boring WASP in the history of boring WASPs.

Mel Ferrer, a moderately successful movie star of Cuban and Irish descent, was married to the exquisite Audrey Hepburn from 1954-1968.

Danny Thomas was a Lebanese-American. He was a huge hit on early TV and his daughter Marlo was the Zoey Deschanel of sit-coms in the late 1960s.