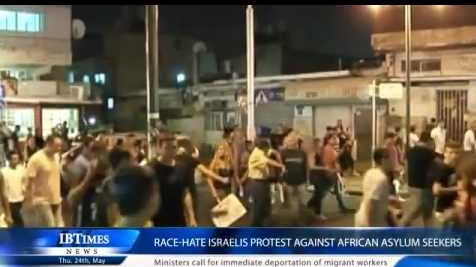 Although the New York Times hasn't yet gotten around to covering the recent pogrom in Tel Aviv against black "illegal infiltrators" (here's video footage of the riot — not all that violent as far as race riots go), Abraham H. Foxman, head of the Anti-Defamation League, issued the following statement today:

We are seriously concerned about the growing tensions in Israel over the issue of African migrants, and reports of lawlessness and violence committed by and directed against the migrants.  We call on all parties to work to calm the tensions, and welcome Prime Minister Netanyahu's condemnation of the inflammatory comments and the violence and his commitment to resolving this crisis responsibly.

While we recognize the complexity involved in properly addressing this issue, and sympathize with Israeli citizens whose personal security has been compromised by the lawlessness and violence of some migrants, we are disturbed by inflammatory public statements made by certain Israeli officials, some of which has veered into racism. These statements are counterproductive and only serve to further inflame tensions.

The role of Israeli law enforcement officials is vital in ensuring the safety of all, controlling lawlessness and violence and enforcing the rule of law.

It is imperative that reasonable solutions be found to confront these challenges, one that humanly treats the migrants while ensuring the security concerns of Israeli citizens are properly addressed.

One of the oldest debates in America has been on the issue of what the nation's immigration policy should be. Should it be fair and compassionate? Should it be restrictive?

In the past, as now, nativism, bigotry and fear of competition from foreign workers dulled the collective American memory of its own immigrant history and democratic ideals. Then, as now, the drums of anti-foreigner slogans are beat in an effort to make the case for a restrictive immigration policy.

... Today, unfortunately, Kennedy's "spacious society" is being closed in and darkness is enveloping Reagan's "shining city." There is no harmony and peace — especially in Arizona. Instead, there is hate, fear, and xenophobia.

Much has been said about Arizona's new law, which requires the police to demand proof of legal residency from residents who arouse suspicion. The police do not need probable cause to suspect a crime has been committed — anyone who "looks foreign" can be stopped. The law virtually invites the police to harass and intimidate Hispanics and other minorities. Obviously, it discourages minority victims of and witnesses to hate crimes from coming forward and helping local law enforcement solve those crimes. It gives untrained state and local police officers the responsibility for enforcing immigration law even though such responsibilities interfere with their responsibility to keep the peace. The law even encourages people to sue the police if they believe immigration laws are not being enforced.

Of course, the Arizona law was not enacted in a vacuum. The immigration debate has become a flashpoint for racists, white supremacists, neo-Nazis and other extremists who blame immigrants for all of our nation's problems. It is a very short distance from that sort of rhetoric to vigilantism. When mainstream figures start expressing the same bigotry, filling the airwaves and the Internet with hateful and incendiary talk, an atmosphere is created for incivility and pernicious legislation is not far behind.

The Arizona law is probably unconstitutional, and will be challenged in the courts. But all of us have a responsibility to look in the mirror and say — how could such a mean-spirited measure become law in this country? Do we really want our nation to resemble societies where anyone can be stopped on the streets at any time, at the slightest whim, and be asked for identification papers?

The Arizona approach to addressing the current immigration crisis is the wrong approach. It happened at a time when our nation is deeply divided along partisan lines. The time has come for Congress to demonstrate bipartisan leadership, condemn xenophobia, and enact comprehensive immigration reform that has an appropriate balance of fairness, compassion, and security.

Abraham H. Foxman is National Director of the Anti-Defamation League. He and his parents immigrated to the United States in 1950.