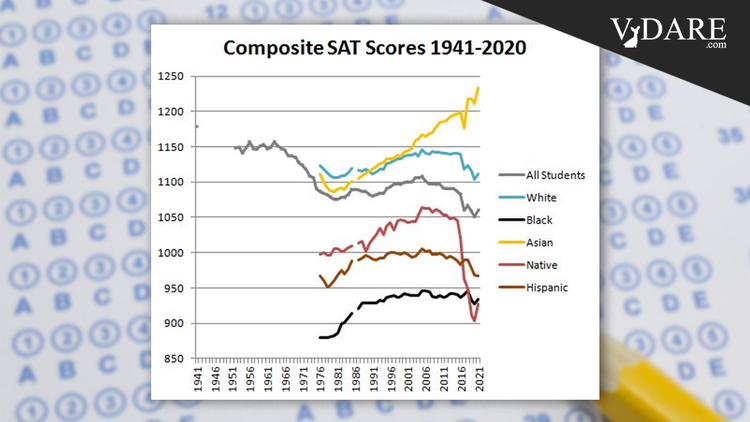 How To Reform Rather Than Junk College Admissions Testing

During the Not So Great Reset, many American colleges are discarding or downgrading consideration of college admissions tests (SAT or ACT) in order to rely more heavily upon even more easily gamed factors such as My Essay About What I Learned Digging Latrines in Costa Rica on Horace Lippincott Prep’s Annual Holiday College Application Enrichment Trip to the Global South.

There are two big factors driving the growing unpopularity of college admission testing:

There is the perennial white vs. black gap in average scores. This has been around forever and it doesn’t change much. All that is different now is that nobody with brains and money really believes at the moment that it will ever go away. In contrast, 15 years ago it was common for billionaires to suggest that their new Ed Reform initiative would Close the Gap real soon now because, obviously, nobody ever tried before us to Close the Gap. So, at the moment, the Ed Reform guys are disillusioned and unpopular.

And there is the growing Asian vs. everybody else gap (from Unsilenced Science): This is almost never discussed publicly, but it has to play a role in the current unpopularity of testing: non-Asian upper middle class parents are seeing their kids get left in the dust by the kids of Tiger Mothers who insist upon fanatical years-long test prep.

These growing anti-Asian sentiments get sublimated into the recent anti-white celebrity frenzy over the fairly small-scale Varsity Blues scandal in which an actress on Desperate Housewives became The Face of Elite Cheating on the SAT.

How could we reform college admissions testing?

1. Get rid of the ancient paper-and-pencil test format in favor of adaptive computerized testing that switches in harder or easier questions on the fly. Kids correctly answering early questions would be served harder questions to help distinguish high scorers more finely, while low scorers would get easier questions to keep them from giving up completely.

This would have a number of advantages:

Instead of drawing verbal questions just from this year’s list of, say, 2000 vocabulary words, which encourages Asians to rote memorize, each test each year would be drawn from all 40,000+ words in the English language.

Switching to adaptive testing allows top scorers to be given harder questions on the fly. So then raise the maximum score another standard deviation to 900 on the SAT and 40 on the ACT. Right now, there is a whole bunch of smart kids who get, say, 0 to 2 wrong per test, which means you can’t have much confidence in how to rank high scorers against each other. Colleges kind of like that because it lets them pick applicants 700+ who appear to be more likely to donate or more likely to be the kind of activists favored by the Admissions committee members (who are compensated in part by getting a thumb on the scale to let in a few kids who remind them of themselves).

This would allow finer distinctions to be drawn among high scorers, e.g.: "This white kid in Decatur doesn’t seem to have had professional help in fine-tuning his essay to appeal to our tastes on the Admissions Committee, but he did score 880 verbal, 860 math. You don’t see that very often.”

2. Shrink SAT to more of a pure IQ test. High-school grade-point average is a pretty good measure of how hardworking students are. But outside of a few St. Grottlesex–type prep schools, it’s not that easy for the admissions committee to figure out just from GPA if the applicant has the raw processing power to thrive in a difficult major.

Moreover, there are more than a few diamond-in-the-rough kids, usually boys, who have the smarts to make something impressive out of their lives but were bored, unchallenged, distracted or whatever in high school.

For example, analogies were dumped from the SAT about 17 years ago For Reasons involving The Gap. But analogies are highly g-loaded and perhaps tougher to massively test prep for. So instead of helping blacks narrow the gap, getting rid of analogies helped Asians pull away.

So, shorten the SAT from multiple hours of stuff that can be massively test-prepped to maybe an hour of the most g-loaded, hardest to prep questions.

3. With the unused time, mandate SAT Subject or Advanced Placement tests to be used in college admissions. That way, test preppers would at least learn some Chemistry or History or whatever.