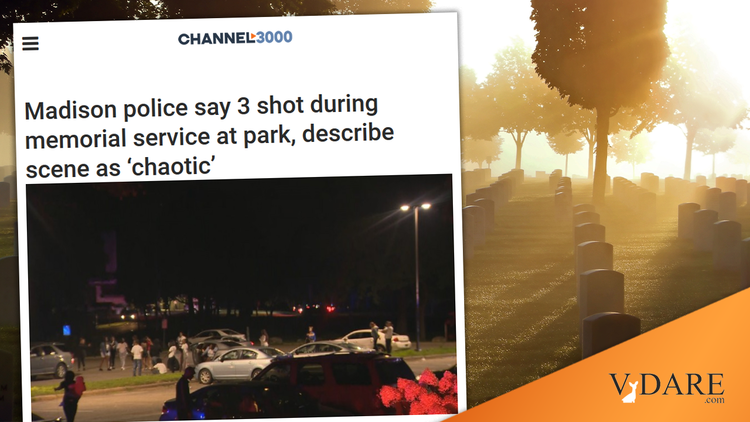 How to Cut Down on Black-On-Black Shootings: Enforce Ban on Funerals/Memorials for Black Murder Victims

Earlier: At A Chicago Funeral, The Gun Violence Epidemic Shoots 14 (Without Killing Anyone)

In iSteve’s continuing coverage of Madison, Wisconsin, from Channel 3000:

MADISON, Wis. — Three people were shot Tuesday night in Madison while attending a memorial service for a homicide victim.

The shooting happened around 9 p.m. as several hundred people, including children, were at Garner Park honoring the life of Maurice Bowman, who was shot and killed ten days ago on Shroeder Road.

Madison police described the scene as chaotic during a press conference Wednesday afternoon. Officers could reportedly see muzzle flashes as they ran into the park.

“People were fleeing into the neighborhoods, hiding in backyards, hiding behind trees, trying to escape the shooting,” Wahl said. …

“The fact that there were no fatalities or not a much higher level of injuries is just something. We’re lucky, we should all be grateful for,” Wahl said.

Three guns and dozens of spent shell casings were found at the park. One of those guns was an assault-style weapon.

“When you have 63 plus rounds being fired, some from an assault rifle in a neighborhood like this, there’s no doubt that creates a risk to the community,” Wahl said.

Two people, a 23-year-old man and a 24-year-old man, were arrested in connection to the shooting.

Just from reading headlines, it seems like during this Summer of George, lots of blacks have been shot by other blacks at funerals or memorial services for blacks shot by blacks. Fortunately, nobody was killed at this memorial or that would have led to another memorial at which there would have been more easy targets for shooters. And potentially on ad infinitum.

There seems like an easy thing Democratic mayors and governors could do to blunt the spike in black on black carnage since May 24, 2020: announce that the ban on large funerals/memorials applies to blacks, too.

In more Madison news, the four “classic Wisconsin frat boys” who set young Althea Bernstein on fire on June 24 when she was definitely not at the riot/arson that was going on, just nearby, are still on the loose.