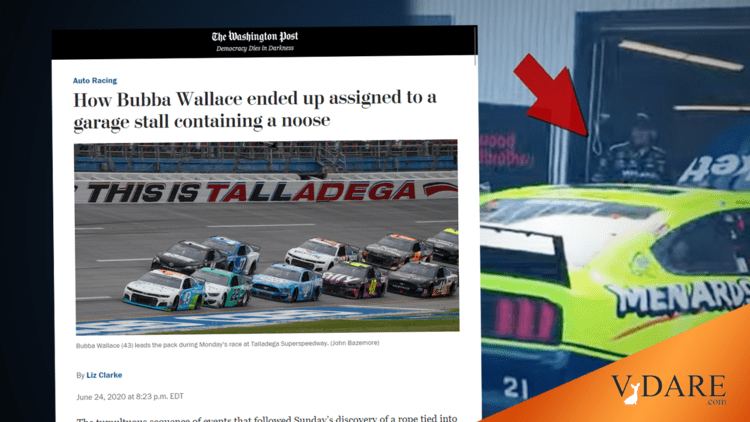 The tumultuous sequence of events that followed Sunday’s discovery of a rope tied into a noose and used as a garage door pull at Talladega Superspeedway appears to have resulted primarily from one assumption and one massive coincidence.

Nobody has released a close-up photo of the “noose” for knot experts to evaluate, but nobody who knows much about knots imagines it would be an actual noose, which is a type of slip knot that would be sub-optimal for a loop to tug on at the end of the rope for pulling the garage door down. Guys who work on race car crews tend to be pretty competent at things like tying knots.

The assumption was that the noose was deliberately placed in the garage stall assigned to the team of NASCAR’s only African American driver in its Cup series, Bubba Wallace, and intended as a threat of racial violence.

The coincidence, one that to many strains credulity, is that Wallace’s team ended up being assigned the only stall among the 44 in Talladega’s infield garage that had a noose that served as a door pull.

In reality, The Last Refuge came up with lots of video of the Talladega garage in recent years showing that many stalls had their garage door pull ropes fashioned into loops that the ignorant and delusional might imagine were nooses.

On Tuesday, 48 hours after the noose was discovered, the FBI announced that no hate crime had been committed because its investigation, which involved 15 agents, concluded that the rope, which the FBI referred to as “a noose” four times in its statement, had been in that particular garage stall since at least October 2019, when the Cup Series last raced at the 2.66-mile Alabama track.

For that reason, the FBI concluded it couldn’t have been a hate crime because no one could have known that Wallace’s No. 43 Chevrolet would have been assigned that stall. It was a coincidence, in other words, and enough to consider the case closed.

NASCAR officials, however, remain sufficiently troubled to continue their internal investigation into why the rope-pull in one of its garages was tied in a noose. Was it simply to lower the garage door via the only knot someone knew how to tie? Or was it to send a racist message that was easily deniable, given the noose’s role as a door pull?

The former is benign. The latter is cause for concern for NASCAR and for any company attempting to project the value of inclusion, even it [sic] doesn’t rise to the level of a hate crime.

As NASCAR’s investigation goes on, the multiple unanswered questions, as well as the intricacies of the sport’s garage stall assignment policy, have sowed broad confusion, deepened skepticism among many and hardened the positions of conspiracists who either reject the FBI’s findings or are convinced Wallace staged the scene.

As many fans struggle to make sense of the sequence of events, several facts are not in dispute, at least in the view of the FBI and NASCAR:

Show us a close-up photo.

It had been there for at least eight months, confirmed by grainy background footage of a video interview shot in the walkway in front of the stall in October 2019, when the Wood brothers team occupied the spot.

No other Talladega stall had a rope-pull fashioned like a noose.

Lots of them have had them, as can be seen in video.

Wallace, 26, whose call for NASCAR to ban displays of the Confederate flag at its tracks this month was instrumental in Phelps announcing that long-discussed step June 10, issued a statement Wednesday saying he was “relieved” that investigators concluded that what had been feared wasn’t the case. And he vowed that the controversy would not detract from the show of unity by drivers and crew members at the start of Monday’s rain-postponed race or the progress stock-car racing has made to be more welcoming.

Racial tensions already were high when NASCAR’s Cup series turned to Talladega, one hour east of Birmingham, for Sunday’s scheduled race. NASCAR’s biggest and fastest track, Talladega is also the most muscular symbol of stock-car racing’s following in the Deep South, built on land donated to NASCAR founder Bill France in 1968 by his good friend and Alabama’s then-governor, George C. Wallace.

It’s also the track where the Confederate flag is most prevalent in the infield, flown by fans who view it as a symbol of a proud, defiant heritage and love NASCAR for much the same reason.

Although 5,000 spectators were admitted Sunday for what was NASCAR’s second race since the Confederate flag ban was announced, several protesters gathered outside the track to display their flags, and a plane flew overhead toting a Confederate flag banner proclaiming “DEFUND NASCAR.”

Before each race, NASCAR assigns garage stalls based on the current season point standings, with the leader getting the most desirable — typically the one closest to the track entrance, for easy access on and off during frenzied practice sessions, the number of which varies from track to track. The second-place team gets the next stall, the third-place team gets the next stall and so on.

Wallace was 20th in the standings entering the race at Talladega, so normally he would have been assigned the stall 19 spots down from points leader Kevin Harvick.

But under novel coronavirus protocols, NASCAR groups multicar teams together to limit social interaction in the garage.

So Sunday at Talladega, the preferred stall went to Harvick as the points leader, and his three Stewart-Haas teammates (Clint Bowyer, Aric Amirola and Cole Custer) were assigned the next stalls in order beside him before Joey Logano, who is second in the standings, and his Team Penske teammates were slotted in.

The domino effect pushed Wallace’s Richard Petty team further back in the pecking order, all the way to Stall No. 4. (At Talladega, the No. 1 stall is near the back of the garage, and thus not desirable.)

In other words, your conspiracy theory from near the top of the article — “The coincidence, one that to many strains credulity, is that Wallace’s team ended up being assigned the only stall among the 44 in Talladega’s infield garage that had a noose that served as a door pull” — is ridiculous.

Basically, this fiasco was driven by bigoted stereotyping of white Southerners.