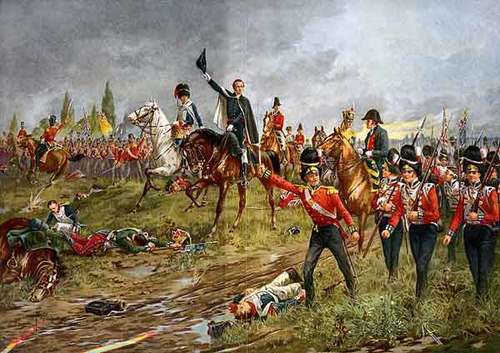 How The Irish Won Waterloo

Kevin Myers has a fine piece in the Catholic Herald arguing that the Battle of Waterloo, fought 200 years ago today, was won by Irishmen, foremost among them the Duke of Wellington.

The Duke of Wellington is still Ireland’s unclaimed son. Perhaps the greatest soldier these islands have ever produced, he is neatly cut in two by the bizarre and contradictory term “Anglo-Irish.” This allows England to claim him, though he wasn’t English, and Ireland to disown him, even though he was Irish-born, and spoke with a thick Meath brogue until elocution lessons (from an Irish Catholic woman) supervened. Even today many Irish people declare that he was the author of the most famous disclaimer of Irishness ever uttered: “Because one is born in a stable doesn’t make one a horse.”

Did he not?  Good grief—I’ve been quoting that for years.

Myers is right, though.  Referring to the infallible Oxford Dictionary of Quotations (Second Edition, 1955), I see 26 attributions to the Iron Duke: the born-in-a-stable quip is not among them.

# 5 [On seeing the first Reformed Parliament]:  I never saw so many shocking bad hats in my life.

Wellington—By God, and have you!

# 11:  The Government was contemplating the dispatch of an expedition to Burma, with a view of taking Rangoon, and a question arose as to who would be the fittest general to be sent in command of the expedition. The Cabinet sent for the Duke of Wellington, and asked his advice.  He instantly replied, “Send Lord Combermere.”

“But we have always understood that your Grace thought Lord Combermere a fool.”

[In the event they sent someone else.—JD.]

Kevin Myers is one of the most astute (trans.: least susceptible to politically-correct flapdoodle) opinion journalists writing today, and is almost as quotable as the Iron Duke himself.  See for example Chapter 11 of We Are Doomed or my review of Myers’ 2009 book Watching the Door.

The only account of the Battle of Waterloo on my bookshelves is the one in John Keegan’s 1976 classic The Face of Battle.  Keegan had a rather dry style, but some of his battle anecdotes stick in the mind very stickily.

Discussing the criteria of honor among Wellington’s officers, for example, Keegan says:

Officers … were most concerned about the figure they cut in their brother officers’ eyes.  Honour was paramount, and it was by establishing one’s honourableness with one’s fellows that leadership was exerted indirectly over the common soldiers …

By way of illustration he gives us Major Howard of the 10th Hussars, with quotes mostly from Albemarle:

Howard, at the very end of the day, was ordered to charge a French regiment. He asked another officer what he thought of his chances, “who said that without the co-operation of infantry it was better not as the Square was well-formed … Major Howard said that having been ordered to attack he thought it a ticklish thing not to do it, and gave the order accordingly.”  Grove, of the 23rd Light Dragoons, saw him ride forward: “we nodded to each other … and a very fine handsome fellow he was; but he evidently looked as if his time had come.” A few moments later, “he gave the order [to charge] and did it with effect, though the enemy stood well, the [British] officers being wounded close to their bayonets and Major Howard falling so that a man in the ranks [stepped forward and] struck him with the butt end of his musket” (in fact he beat his brains out).  Howard’s open-eyed “going upon his death” seems to have epitomized for most Waterloo officers what honorable conduct was, for he is picked out for mention more than any other British soldier present and his kinsman, Byron, who made a pilgrimage to his grave, wrote a funerary ode for him.