California Offers Another Freebie for Illegal Aliens: Healthcare for the Kids

Nobody should be surprised that Democrat-run Mexifornia has enacted free-to-them healthcare for illegal alien kiddies, and Gov Jerry Brown is ever so pleased with his liberal generosity with the taxpayers’ money. “All in all, I think the people of California can be proud of the work that’s been done,” Brown said.

An estimated 170,000 immigrants 18 and younger could be included in the plan, which supposedly would cost around $132 million annually — barely a nickel in the state budget of $115 billion, or thereabouts. So we are supposed to think.

Also note in the video following, $57 million for illegal alien drivers’ licenses — the taxpayers are dinged for that too. The lawbreaking foreigners pay only $33 for the amnesty-lite document. 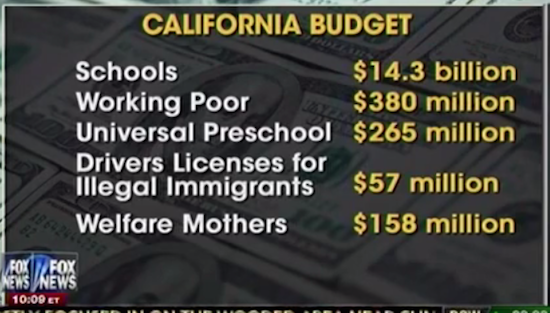 However, when a major state rolls out the big freebie welcome mat, particularly for healthcare, the policy creates a powerful incentive to draw illegal aliens with expensive medical problems. One medical moocher is Ana Puente (pictured), who was an infant with a liver disorder when her aunt brought her illegally to the U.S. to seek medical care. California taxpayers have been forced to fund her three, maybe four, liver transplants and ongoing anti-rejection treatments. Taxpayers have spent well over $1 million, maybe twice that, for Puente’s medical costs.

And that was before free healthcare for all illegal alien kiddies became law in California.

Another transplant case was Jesica Santillan a Mexican who parents brought her illegally to the United States in hopes of advanced medical treatment. The teenager got two heart-lung transplants because the first organs had the wrong blood type. She died anyway. But apparently liberals believe they get more virtue points for giving other peoples’ donated organs to illegal aliens, not Americans.

Transplants are a very expensive procedure, but so are many others these days. Modern medical science performs miracles, but they don’t come cheap. California’s kiddie healthcare magnet will draw the worst, most expensive cases from abroad, and illegal aliens believe they are entitled to free, first-world healthcare. A 2006 Denver Post story reported, “Hundreds of Mexican illegal immigrants are in Colorado not just for work but also for free medical care they say they can’t get back home.” It’s unlikely that number has decreased in the intervening years.

SACRAMENTO, Calif. (AP) – A budget deal between Gov. Jerry Brown and legislative leaders would make California the first in the nation to offer state-subsidized health care to children who are in the country illegally.

The $115.4 billion agreement announced Tuesday is expected to win easy approval from the Senate and Assembly before the fiscal year begins July 1, and its immigrant health care provisions were touted by its backers as a necessity in the face of federal inaction.

“While Washington dithers because they can’t get things done, we need immigration reform,” Senate President Pro Tem Kevin de Leon, D-Los Angeles. “The reality is many of these children, and they are children, require some kind of health care and they receive it in the emergency room.

The cost to taxpayers would be $40 million in the new fiscal year and grow to $132 million a year once fully implemented, numbers that had Republicans objecting and warning that it won’t help immigrants get access to doctors because of the shortage of providers who accept Medi-Cal, the state’s health program for the poor.

Anti-immigration advocates said it was yet another move from Brown – like a bill providing driver’s licenses that took effect this year – that is “extremely generous” toward people who enter the country illegally.

“Gov. Brown continues to sign laws that incentivize more illegal immigration,” said Joe Guzzardi, spokesman for Californians for Population Stabilization. “I can’t really see what reason there would be not to come to California. I can get a job, I can get tuition, I can now get medical care for my children.”

But the California Immigrant Policy Center called the move a “ray of hope” for many in the state.

“California will take a key first step toward recognizing that health care truly is a human right,” the group’s Executive Director Reshma Shamasunder said in a statement.

The revised spending plan is far closer to Brown’s $115 billion proposal in May than the $117.5 billion version approved a day earlier by the Democratic-controlled Legislature. It adds $61 million in spending above his May plan.

“All in all, I think the people of California can be proud of the work that’s been done,” Brown said.

Brown also announced he is calling two special sessions to address how California pays for roads, highways and other infrastructure and Medi-Cal. There is a $5.7 billion annual backlog in road repairs, the administration said.

But Republicans warned that the special sessions could result in new taxes on gasoline, cigarettes and health care. “Given the $14 billion of unanticipated tax revenues the state has just received, it is difficult to understand why their starting point is to impose billions of dollars in additional taxes on hard-working Californians,” said Senate Minority Leader Bob Huff, R-Diamond Bar.

Legislative Democrats had sought to restore spending on a host of social welfare programs that were cut during the recession, and they pushed to expand support for the neediest in California as the state enjoys a surplus. Their proposed budget added $749 million in new spending.

Under the compromise announced Tuesday, Brown agreed to keep some of those programs such as boosting the number of state-subsidized child care slots, giving in-home support workers a raise, and expanding health coverage to children regardless of their legal status.

The governor said he was able to fund those programs without adding to state spending by finding savings in a variety of other programs, including fixing an accounting error in health spending.

Still, advocates who had pressured the Democratic governor to expand programs were disappointed. Brown rejected proposals to allow child care workers to unionize, kept a cap on welfare payments meant to discourage low-income women from having additional children, and rejected Medi-Cal payment increases to doctors and dentists.

“This budget doesn’t do anything to stop punishing poor children,” said Mike Herald, legislative advocate with the Western Center on Law and Poverty.