How Political Correctness Is Anti-science and Anti-art

America’s most spectacular trove of human biodiversity depictions is badly abused today. One of the most impressive American female artists remains in obscurity, in an age which dredges up forgotten women artists as role models, because of her sins against racial correctness.

Malvina Hoffman has been called “the greatest American artist you’ve never heard of” and “the American Rodin.” She studied under Auguste Rodin, the greatest sculptor since Bernini, and Gutzon Borglum, creator of Mt. Rushmore. Her style was more realistic than Rodin’s, which helped drive her out of fashion in a 20th Century art world obsessed with abstraction.

In 1930, the Field Museum of Natural History in Chicago commissioned her to create 91 full size bronzes and 13 marbles depicting in exquisite detail the “The Races of Mankind.” She traveled the world to complete this most titanic sculptural project undertaken by any American woman ever. In 1933, the Hoffman exhibit opened in the Field Museum’s spectacular custom-built “Hall of Man.” It was a major part of the Chicago World’s Fair and remained a popular institution for decades afterwards. But it was shut down in 1968 because, well, because it was 1968.

Hoffman’s collection was broken up. A quarter of it is now in Cedar Rapids. When I last visited the Field Museum in 1999, only about half the statues were on display, and many of those were pushed into dark corners, often without labels. The magnificent 6’8″ Nilotic Nuer warrior, with proportional masculine endowment, was down in the basement next to the dusty souvenir-making Mold-o-Vac and Penny Squeezer machines.

I asked a curator about this neglect. She told me the sculptures deserved to be treated with disdain because they weren’t realistic. …

But Ms. Hoffman published photos of many of her subjects in her autobiography. The only thing unrealistic about them is that Hoffman, Rodin’s pupil, no doubt made them all a little healthier, handsomer, and more heroic looking. Is that so bad?

The real reason her great accomplishment is treated with disdain is that it vividly and memorably demonstrates human biodiversity.

And that’s what the museum’s social anthropologists fear and loathe.

CHICAGO — For decades, the bronzes created by the artist Malvina Hoffman for the Field Museum’s “Races of Mankind” exhibit have had a ghostly afterlife at the institution. Hailed at their unveiling in 1933 as “the finest racial portraiture the world has yet seen” and viewed by millions of visitors, the sculptures were banished to storage in 1969, embarrassing relics of discredited ideas about human difference.

Some were later scattered through the museum, like the Australian aboriginal man who stood guard for a time outside a McDonald’s on the ground floor, minus his original boomerang and spear. But to curators they remained strangely compelling, if troubling, objects.

“When I first came here, I sort of fell in love with them,” Alaka Wali, an anthropologist at the museum, recalled recently. “But there was always debate about what the museum should do with them. They were problematic objects.”

Now the Field Museum has put 50 of the 104 sculptures back on display as part of “Looking at Ourselves: Rethinking the Sculptures of Malvina Hoffman,” an exhibition exploring both Hoffman’s artistry and the vexed history of the dubious scientific ideas that her talent was enlisted to serve. At the time of the bronzes’ creation, many anthropologists believed that the world’s people could be divided into distinct racial types, whose visible differences in skin tone, hair texture and bone structure explained differences in behavior.

It’s an idea, the show makes clear through wall texts and video touch-screen displays, that scientists have abandoned, though hardly one that has entirely gone away.

“It’s not as if just because scientists say race is not a biological fact, that it doesn’t continue to have an impact,” Ms. Wali, who curated the exhibition, said during a tour of the gallery. She stopped near a section discussing the legacy of scientific racism, which includes photographs of Black Lives Matter protests.

Especially when after 15 years of genome studies, the scientists who know what they are talking about say the exact opposite.

The new exhibition, which runs through the end of the year, was financed in part by Pamela K. Hull, a granddaughter of Stanley Field, the museum’s president from 1909 to 1964, who paid for the restoration of the bronzes.

It was Field who, in 1929, voted with the museum’s board to commission a group of artists to depict the world’s varied “racial types in a dignified manner.” Instead, the whole job went to Hoffman, a New York sculptor who had studied with Rodin, in what The New York Times called “probably the largest commission ever granted any sculptor,” male or female.

Hoffman traveled the world looking for models with her husband, Samuel Grimson, who took thousands of photographs and made film clips of potential subjects. Hoffman, who once studied anatomy by dissecting cadavers alongside medical students, approached the project with a meticulous realism, using different patinas to subtly suggest skin tones.

The “Races” exhibit, which opened in 1933, included both simple busts and elaborate life-size pieces showing people shooting arrows, climbing trees or posing with spears. In the center stood “Unity of Man,” showing noble figures representing what were believed to be the world’s three main racial groups shouldering the globe equally. But its overall thrust — driven home by diagrams showing different nose types and the like — was unmistakable: The world’s peoples could be arranged in a hierarchy, from the primitive to the most civilized.

About 10 million visitors viewed the exhibit over the next three decades, according to the museum, and a show of miniature reproductions traveled the country. But by the 1960s, the scientific theories behind the show had fallen into disrepute. In 1969, the exhibit was dismantled. The Field also halted publication of a “Map of Mankind” based on the exhibit, after receiving a letter from the poet Amiri Baraka (born LeRoi Jones), who denounced it as “white racist pseudo anthropology.”

After all, who knew more about evolution and genetics than Amiri Baraka? 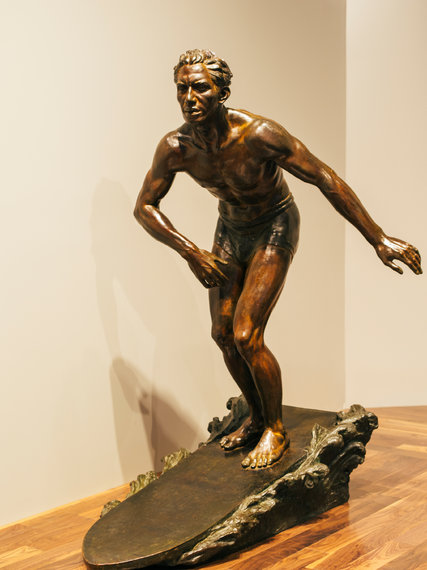 Science has shown today that “we share a common ancestry and the differences among people are not as great as they seem,” according to the website for “Race: Are We So Different?” — a traveling exhibition created by the American Anthropological Association.

At the Field, the few permanent exhibits that address human variation focus on cultural differences, like a wall of shoes from around the world that Ms. Wali curated in 1997.

… The Hawaiian man shown on a surfboard was Sargent Kahanamoku, a member of a well-known Hawaiian family (and brother of the famous surfer Duke Kahanamoku). The model for a bust of a “man from eastern China” was Dr. Hu Shih, the diplomat and scholar who helped establish the modern Chinese script.