The Ongoing Whiteness Crisis Comes to the NFL 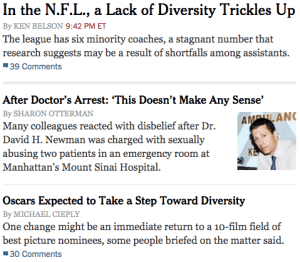 As part of America’s Ongoing Whiteness Crisis, the press is currently worked up over how blacks are represented only roughly equal to their share of the population in a couple of fields: in acting Oscars, where blacks have been 10 of the last 80 winners in the four acting categories (12.5%), and in NFL coaching, where blacks make up 5 of the 32 head coaches (15.6%).

The NYT has an article about how the Academy of Motion Pictures is considering solving its Whiteness Crisis by lowering its standards (i.e., increasing the number of nominees). But perhaps the Academy should take a tip from academia and institute Holistic Nominations modeled upon Holistic Admissions (i.e., let everybody vote, but then fudge the results a little to match the racial , excuse me, goal). This month’s Oscar Whiteness Crisis has revealed that the most repulsive problem with the Academy Awards is old-fashioned honest vote-counting.

For years, the Oscars have made a big deal about how the votes are tabulated accurately and secretly by a disinterested accounting firm, but that just leads to scandals like this due to the Dismagic of Small Sample Sizes. In the 21st Century, it seems outrageous that there’s no thumb on the scales to make sure of enough plaques for blacks. The secret ballot and one person-one vote are outmoded in the Diversity Age.

Also from the front page of NYTimes.com:

Among N.F.L. Coaches, a Lack of Diversity Trickles Up

In all, seven coaches were fired, roughly in line with recent years.

What is perhaps more remarkable is who replaced them: All but one was white, and the hiring of one black head coach, Hue Jackson by the Cleveland Browns, was offset by the dismissal of Lovie Smith, who coached the Tampa Bay Buccaneers for just two seasons. …

The net result is that the league has six minority coaches (including Ron Rivera of the Carolina Panthers, the only Latino head coach), the same number as last season and one fewer than the peak, in 2006 and 2011.

The article is of course about why there are only 5 black NFL head coaches instead of why there is only 1 Hispanic coach. There are now far more Latinos than blacks in the U.S., but nobody seems to be able to pay them more than just cursory attention.

It’s interesting whether in the future we will see more hoopla about underrepresentation of Latinos or Asians, or if blacks will continue to hog all the diversity attention. I could see it going either way. I’m sure irate Asian overachievers will continue to beaver away on their standardized op-eds complaining about the Media Myth of the Model Minority, but probably nobody except me will bother to read them. But will the Hispanic Sleeping Giant awake? Or will nobody much care?

But that got me thinking about what positions NFL coaches played as young men. A Reddit thread from after the 2013 season digs up the old playing positions of NFL head coaches, offensive coordinators, and defensive coordinators. Quarterback is #1, followed by linebacker, although there are usually three of them on the field most of the time, versus only one quarterback and roughly two for most other positions. Running backs are rare.

Only 17 of the 94 listed NFL head coaches, OCs, and DCs had played in the NFL, so the racial disproportions of NFL rosters aren’t all that relevant to understanding the pool of coaching talent.

I would bet that a very large fraction of NFL coaches are the sons of men who did some coaching in their day.

The most famous player among coaches in 2014 was likely Jim Harbaugh, but he’s since gone back to the U. of Michigan to coach. (His pay package was pretty similar at both levels: college coaches need to recruit, which is a lot of work.)

The most successful and controversial head coach, Bill Belichick of the New England Patriots, played center and tight end at upscale Wesleyan, where he also played lacrosse and was captain of the squash team.

Also, it probably helps if you were a larger than average youth, such as coach Andy Reid of the Kansas City Chiefs, who in 1971 was the World’s Largest 13-Year-Old: