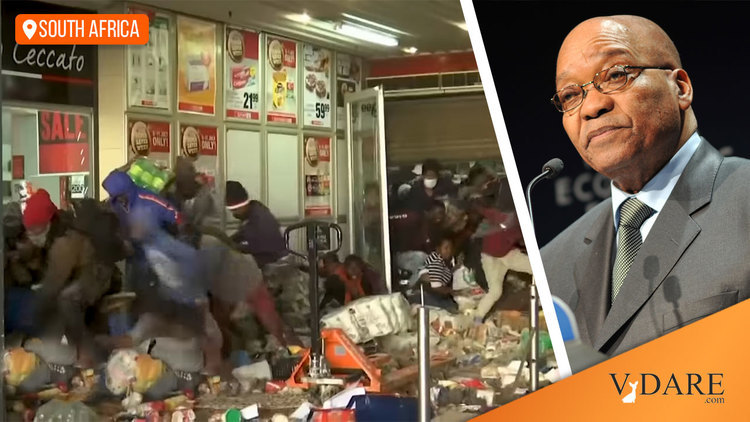 The violence in South Africa is kind of like if BLM went to war against Rep. Jim Clyburn for control of the racial spoils system in the name of destroying “white monopoly capitalism,” with Asian Indians bearing most of the brunt of the destruction. Or something.

The jailing of the former president [Zuma] for repeated failure to appear before a judicial inquiry probing allegations of systematic corruption during his rule was a significant victory for [current president] Ramaphosa, who leads a moderate and pragmatic faction of the ANC, but appears to have provoked a violent response.

Zuma’s supporters say the 79-year-old former anti-apartheid fighter is the victim of a witch-hunt orchestrated by political opponents. On Friday, the “Free Jacob Zuma Campaign”, which is led by two suspended members of the ANC, issued an ultimatum to Ramaphosa, saying the president had 14 days to release his predecessor.

“Let us be crystal clear; we do not support violence. Only a free president Zuma can address our nation and call for calm,” a statement from the campaign said.

“White monopoly capitalism and the parasitic black comprador capitalist that continues the exploitation of our people are our main enemies. Their removal from power and continuing control over our economy and lives is non-negotiable and cannot wait a day longer.”

Zuma’s faction claimed to want to implement a “radical economic transformation” of South Africa, one of the most unequal societies in the world – though, under his rule, unemployment soared, services deteriorated and institutions were undermined by widespread corruption.

In contrast, Ramaphosa did it the right way: the former labor organizer already had $450 million when he pushed Zuma out in 2018. He dialed back use of the term “white monopoly capitalism,” much to the relief of the kind of people who are the reason Ramaphosa has $450 million.

… The meltdown in South Africa isn’t a natural disaster or a random fluke. It’s a choice. South Africa was the first modern nation to be refounded on the anti-white principles of critical race theory, and now it is reaping the whirlwind of that choice.

South Africa did everything that is being done in America right now. As a hyperdiverse multiethnic, multilingual society, South Africa has followed almost every prescription embraced by the globalist ruling class.

This is about more than riots. This wave of violence will eventually peter out. But there is no reason to be optimistic when that happens. …

South Africa’s dominant African National Congress party is corrupt and ineffective, but its most dangerous rival is one of the most radical political parties to enjoy representation on Earth. The Economic Freedom Fighters vow to seize white-owned land (without payment), nationalize the banking and mining sectors, and double welfare payments.

But EFF isn’t a radical outlier in South African politics. It’s the natural endgame for the country’s post-apartheid ideology. For decades, the South African economy has been shaped by a policy known as Broad Based Black Economic Employment. Despite its name, there is nothing “based” about BBBEE. Instead, the policy uses the same tactics to achieve “equity” that activists in the United States are demanding.

BBBEE relies openly and explicitly on injecting racial preferences throughout the economy. Companies receive a BBBEE scorecard based on hiring black workers, elevating black management, and giving black South Africans a share of ownership. Companies with high BBBEE scores are given favorable tax treatment and preferences in government contracts. Corporate actors are strongly incentivized to give contracts to high BBBEE scorers as well.

The results are predictable. Remember those rolling blackouts Revolver mentioned above? Eskom, South Africa’s public electric utility company, is one of the most aggressive adopters of BBBEE. South African National Assemblywoman Gwen Ngwenya described the outcome of this approach in a 2019 column:

Why is Eskom in trouble? Because it has high operating costs and it cannot meet its debt obligations. Why? It’s ambitious programme to build two big power stations has incurred substantial cost overruns and technical faults. Why? In part it was flawed from the beginning with a small bidding pool, meaning it was likely not cost competitive from the start. Why? There was political meddling. Why? Chancellor House. Why? Contractors needed to have a black partner in order to secure contracts. Why? BEE. [PoliticsWeb.za]

A decade after the skills shortages plaguing Eskom at the time of the 2008 financial crisis, it still cites ‘people issues’ as one of its major concerns. This is startling for a company where the staff complement has increased by almost 50% in the last 10 years. As recently as 2015 Eskom was talking about reducing the number of white engineers by 1,081 and white artisans by 2,179 in professional and mid-management positions in order that the utility could more accurately resemble the demographics of the country.

… Just like in the United States, rampant affirmative action is an invitation to naked cronyism, insider dealing, and corruption. Burdensome racial quota laws fall heaviest on small and up-and-coming businesses, while the largest mega-corporations have the easiest time complying. If a company is to be politically rewarded for handing out ownership based on race, why not gain even more security and let the politically connected into the ownership caste? If you have to hire unqualified hacks for senior management, why not give the jobs to politicians’ children? Corrupt behavior like this happens even in the best systems. But as one South African observer notes, in that country it’s by design:

Across state in-house institutions like the South African Revenue Service, the National Prosecuting Authority and the National Intelligence Agency, black-first narratives were used to effect ‘state capture’ which meant shielding those corrupt rent-seekers (black and white) who used BEE deals, slush-funds and tax dodging to fizz their champagne while flattening the rest of us.

As the country has broken down, race hate against white people isn’t used to reduce inequality but to increase it — much like in America. One of South Africa’s richest families is the Gupta family; Indian immigrants who arrived in 1993 to profit off the end of apartheid. The Guptas soon built a close relationship with the now-jailed Jacob Zuma. When Zuma became president, his actions benefited the Guptas to such a degree that it constituted state capture.

According to testimony heard at the inquiry, the Guptas went to great lengths to influence their most important client, the South African state.

I am shocked, shocked to hear that influence peddling is going on in South Africa.

Public officials responsible for various state bodies say they were directly instructed by the Guptas to take decisions that would advance the brothers’ business interests.

It is alleged that compliance was rewarded with money and promotion, while disobedience was punished with dismissal.

The public bodies that are said to have been “captured” in this fashion included the ministries of finance, natural resources and public enterprise, as well as the government agencies responsible for tax collection and communications, the state broadcaster SABC, the national carrier, South African Airways, the state-owned rail-freight operator Transnet and the energy giant Eskom, one of the world’s largest utility companies. [BBC]

Crucially, when political heat was directed toward the Gupta family, they knew exactly how to fight back: Point the finger at society’s most acceptable target, white people. The Guptas employed a British PR firm to argue that South Africa’s problem wasn’t a corrupt family dynasty, but the white race hoarding resources from everyone else:

According to an investigation by the Sunday Times last month, Bell Pottinger took on the Gupta family as clients in 2016 to try to improve their image, and the chosen strategy was to target white business leaders as a distraction from serious allegations of state capture.

One of the strategies was apparently to drive a predominantly social media narrative that “white monopoly capital”, the SA Communist Party and National Treasury have been standing in the way of transforming the South African economy.

The phrase “white monopoly capital” has, over past months, become a major feature of mainstream political discourse, with even President Jacob Zuma using it.

What’s interesting is how much pushback there was against Zuma and the Gupta’s denouncing “white monopoly capitalism.” The New York Times’ reporter David Segal went berserk against the term, for example. In contrast, the NYT has not exactly come out against terms like “white privilege” and “white supremacy” in the U.S.

… Malema has also infamously declared that his party is not calling for the murder of white people, “at least for now,” a comment that was declared to not be hate speech by South Africa’s human rights commission.

In South Africa’s 2019 elections, the EFF received almost 11 percent of the vote. The party’s rise has driven the ANC to contain it by gradually moving toward a constitutional amendment that would allow the state to confiscate land from white farmers without any compensation. For a preview of how that works, just look at neighboring Zimbabwe:

But as South Africa’s CRT-driven economic policies break down, the country is likely to only get more radical. Much of South Africa has fully embraced the ideology of American critical race theory darling Ibram X. Kendi, which holds that if outcomes differ between two racial groups, the only possible cause is racism, and the only possible remedy is direct intervention to correct the “injustice.” The disastrous example of Zimbabwe barely matters.

As South African society frays apart, the always-dangerous country is returning to the levels of violence seen at the end of apartheid, when onlookers feared full-blown genocide was imminent. It’s not from lack of police. South Africa has one police officer for every four hundred people, a substantially higher figure than the United States. But the police are borderline useless at actually protecting the nation’s law-abiding citizens, who are forced to rely on private security or their own devices in order to keep themselves safe.

From the late 90s onwards, in the name of hitting diversity quotas, South Africa’s police adopted a “fast-track” promotion strategy while also gutting training requirements for new recruits. Senior police leadership became political appointees selected for loyalty rather than competence. The end result is a shoddy police force that kills people with hammers for violating COVID-19 lockdowns but abandons the population in the face of lethal riots.

Despite being the most consistently violent country on Earth, South Africa is unwilling to use real force to stand up for civilization. The death penalty was abolished in 1995 and hasn’t been in use since 1990.

But just like how American elites are increasingly obsessed with century-old riots while ignoring the anarchy they unleashed in 2020, in South Africa rising crime rates have been coupled with a growing obsession with the ever-more-distant legacy of apartheid. Just days before the riots began, South African law enforcement announced a new effort to investigate and prosecute decades-old crimes during the apartheid era. …

For three decades, South Africa has avoided the calamitous implosion suffered by Zimbabwe. But because it has accepted the same basic assumptions about reality, it will soon suffer the same fate. And if America continues down the same path, the path demanded by anti-white doctrines such as Critical Race Theory and other identity politics hustlers, it too will collapse in turn.

In one way, whites are better off in South Africa because they’ve always known they are a minority and they must play divide and conquer to keep their money. Thus, rich whites like (I’m guessing) the Oppenheimers reacted vastly more impressively against the term “white monopoly capitalism” than have whites in the United States against similar blood libels. The Guptas got demonized and now Zuma’s boys are attacking the Guptas’ co-ethnics.