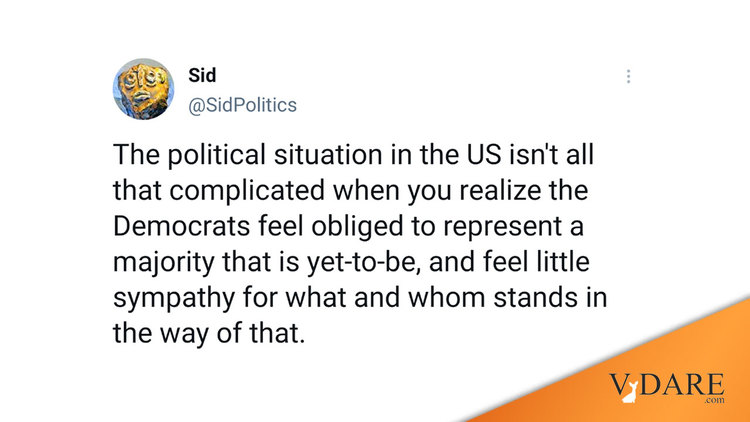 A Succinct Summation: Democrats Feel Obliged To Represent The Majority That Is-To-Be....

The political situation in the US isn't all that complicated when you realize the Democrats feel obliged to represent a majority that is yet-to-be, and feel little sympathy for what and whom stands in the way of that.

Yes, it’s like my Finance professor’s point that drove Open Borders economist Bryan Caplan temporarily insane with rage because he couldn’t think of an intelligent response and he knew it. I wrote in 2005:

Let me describe citizenism using a business analogy. When I was getting an MBA many years ago, I was the favorite of an acerbic old Corporate Finance professor because I could be counted on to blurt out in class all the stupid misconceptions to which students are prone.

One day he asked: “If you were running a publicly traded company, would it be acceptable for you to create new stock and sell it for less than it was worth?”

“Sure,” I confidently announced. “Our duty is to maximize our stockholders’ wealth, and while selling the stock for less than its worth would harm our current shareholders, it would benefit our new shareholders who buy the underpriced stock, so it all comes out in the wash. Right?”

“Wrong!” He thundered. “Your obligation is to your current stockholders, not to somebody who might buy the stock in the future.”