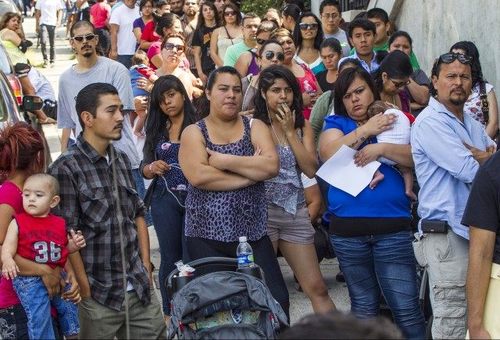 How Immigration Is Transforming Virginia, And The Nation

Virginia is where America began.   The Jamestown colony founded in 1607 was the first of the 13 English colonies which became the United States of America.   The state is the birthplace of 8 presidents, and I’m proud to say that the Wall family is of colonial Virginia stock.

Now Virginia is being transformed into a Third World entity, with predictable results.

A remarkable transformation is underway in the Commonwealth of Virginia. The birthplace and final resting place of George Washington, James Madison, Thomas Jefferson—and once one of the most reliably-red of red states—is being rapidly turned into a progressive stronghold.

The writer isn’t afraid to point out the reason for this transformation. Has she been reading VDARE.COM?

Yes, it’s due to immigration.

A middle-aged person living in parts of Virginia today will have witnessed more demographic change in the span of her life than many societies have experienced in millennia. A census study entitled “Immigrants in Virginia,” released by University of Virginia (UVA) researchers, documented the phenomenon: “Until 1970, only 1 in 100 Virginians was born outside of the United States; by 2012, 1 in every 9 Virginians is foreign-born.”

That is a huge demographic change. And where are these immigrants from?

UVA’s report explains that more than three out of four of Virginia immigrants (77 percent) are coming from either Latin America or Asia—immigration from Europe, the report writes, “lag[s] far behind” representing only 10 percent of Virginia’s immigrant population. This is consistent with trends nationwide.

Really, we don’t need more immigrants. But if we are going to take in immigrants, why not take them in from the Anglosphere and Europe?   They assimilate better and cost less.

According to the 2013 Department of Homeland Security (DHS) Immigration Yearbook, only 8.7 percent of green cards issued by the federal government went to immigrants born in Europe, a product of immigration changes pushed through by Ted Kennedy in 1965.

And just because an immigrant is listed as coming from, say, the UK or Germany doesn’t mean that he’s what you would think of as British or German.

DHS’ yearbook, however, does not provide information on parental nativity– in other words, it doesn’t say whether an immigrant from the United Kingdom may be the child of Saudi parents.

When the Jamestown colony was formed in 1607, they were wary of attacks from the Spaniards.   Today’s Spanish-speaking conquistadors, however, are subsidized by the federal government.

“Statewide the number of Hispanics almost doubled to 632,000. Hispanics now make up 8 percent of Virginia residents.” The Post continues, “The state’s Asian population also took off, climbing by 68 percent in 10 years.”

White Virginians are being driven rapidly towards minority status.

Because these newcomers to Virginia have largely been invited into the country with green cards or other visas, they can collect public benefits, fill any job, rely on federal retirement programs, and become naturalized voting citizens.

Of course, the mass invasion of immigrants (legal and illegal) is a nationwide phenomenon.

When is enough enough, or too much?

The Census Bureau projects that the U.S. will add another 14 million immigrants over the following ten years if green card programs aren’t slashed, pushing the U.S. past all documented historical immigration records in terms of immigrant to population ratio.

We need an immigration SHUTDOWN now.

When a high point was hit last century, then-President Calvin Coolidge hit the pause button for roughly fifty years– producing an era of explosive wage growth. That pause continued until Ted Kennedy ushered in legislation that opened our borders to the entire world.The steady gusher of visas happens silently and with  little media recognition, yet its effects are more permanent and transformative than many of the most far-reaching foreign policy accords.

Of course, there are political consequences.

…….The Times Dispatch continues, “Virginia’s demographic changes have also transformed political leanings in the state that, before President Barack Obama’s win of electoral votes in 2008, had not backed a Democratic presidential candidate since 1964.”

And how are these immigrants voting?

Explain to me again why leading Republicans support mass immigration. They should all be banging the drum for an immigration shutdown.

As Reuters reported in a recent article on U.S. visa policies: “Immigrants favor Democratic candidates and liberal policies by a wide margin, surveys show, and they have moved formerly competitive states like Illinois firmly into the Democratic column and could turn Republican strongholds like Georgia and Texas into battlegrounds in the years to come.”

A 2014 report authored by University of Maryland professor James Gimpel, similarly found that, “the enormous flow of legal immigrants in to the country — 29.5 million 1980 to 2012 — has remade and continues to remake the nation’s electorate in favor of the Democratic Party.”

The report cites a 2012 study conducted by YouGov that, “gauged the partisan preferences of over 2,900 naturalized immigrants, finding 62.5 percent to be Democratic identifiers, 24.6 percent Republican, and 12.9 percent independent.”

Examining the data in this study led Washington Examiner columnist Byron York to conclude: “The bottom line is that more immigration favors Democrats; there is no prediction of Democratic electoral ascendancy that doesn’t rely on demographic factors as the main engine of the party’s dominance.”

According to the AP, “El Salvador is the top country of birth for immigrants to Virginia.”     And that has brought about the arrival of the MS-13 gang to Virginia.

…this migration has brought the arrival of the feared Salvadorian gang, Mara Salvatrucha, also known as MS-13.

The article brings out these figures that further illustrate the direction we’re heading.

There’s plenty more in the article, check it out here, and kudos to Julia Hahn for presenting this information to the readers of Breitbart. She´s a real journalist who is not afraid to take on the tough issues. You can congratulate her here.