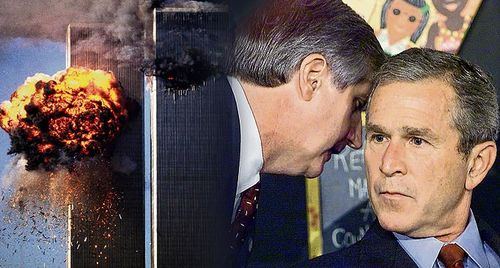 How George W. Bush's War on Airport Profiling of Arabs Contributed to 9/11

With Donald Trump saying that being extremely tough on immigration might have prevented 9/11, I’m reminded of a couple of old articles I wrote. The first I wrote on the evening of September 11, 2001, in which I pointed out that in second Presidential debate of 2000, Bush had announced:

Bush said during the nationally televised debate, “Arab-Americans are racially profiled in what’s called secret evidence. People are stopped, and we got to do something about that.” Then-Governor Bush went on, “My friend, Sen. Spence Abraham [the Arab-American Republic Senator from Michigan], is pushing a law to make sure that, you know, Arab-Americans are treated with respect. So racial profiling isn’t just an issue at the local police forces. It’s an issue throughout our society. And as we become a diverse society, we’re going to have to deal with it more and more.”

Once in office, Bush and his Transportation Secretary Norman Mineta had followed up with federal programs to make wipe out profiling of Arabs at airports.

Years later we learned that the counter clerk who checked in the leader of the terrorists, Mohammed Atta, on that fateful morning, thought to himself, as he told Oprah Winfrey:

Then Tuohey went through an internal debate that still haunts him.”I said to myself, ‘If this guy doesn’t look like an Arab terrorist, then nothing does.’ Then I gave myself a mental slap, because in this day and age, it’s not nice to say things like this,” he said.

It’s not just a matter of letting hostile foreigners into the country, it’s also all the restrictions we impose on our own noticing, our see something, say something urge.

[See also Trump Doubly Correct On Bush And 9/11: His Watch, And He Weakened Arab Airline Screening ]